Ciao! Our first full day in Venice and also the day of the famous Festa del Redentore (Feast of the Most Holy Redeemer), a festival held in every 3rd weekend of July which celebrates the end of the plague of 1576. We woke up pretty late (9 am) probably due to jet lag and had a wonderful breakfast in the executive lounge at Hilton. The breakfast buffet was decent – juice, muffins, hams, croissants, and yogurts. After breakfast, we checked our hotel shuttle schedule and took the ferry to St Mark’s Square. The ferry ride was around 15 minutes and not crowded at all! The ferry stopped in front of the monument, very close to St Mark’s Square.

First, we passed by the famous Bridge of Sighs where crowded with people taking photos, well I was one of them! Last time we were here, the bridge was covered due to renovation so I can’t help but take a few photos! Then, we passed by St Mark’s Square  it was already crowded with groups of tourists! Too bad one side of the Basilica was under repair so I couldn’t get a full photo of it….another reason to come back next time right? 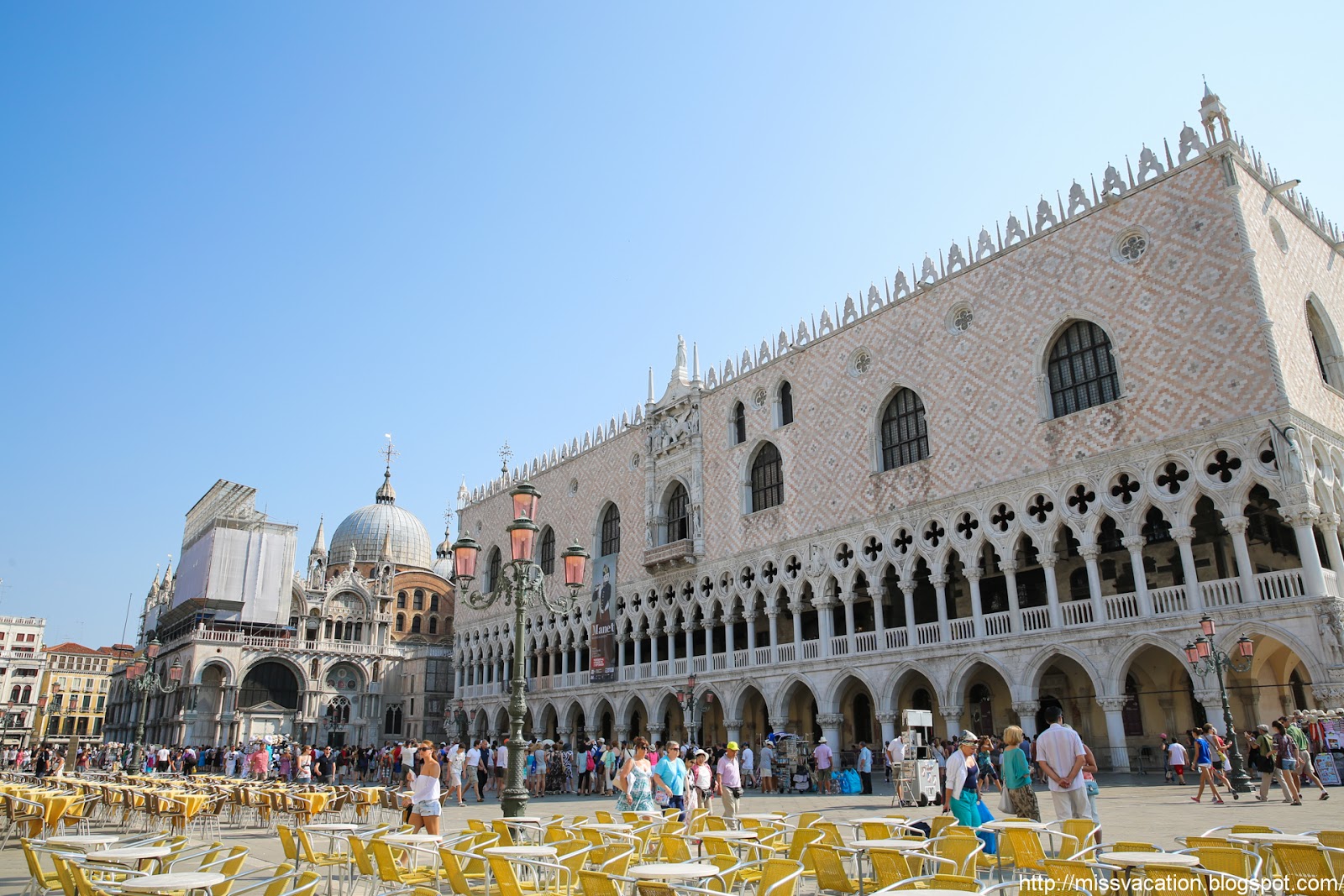 Today’s itinerary: no itinerary!  We decided to walk around without map (well even with a map, you’ll get lost in Venice but don’t worry almost everywhere you go will be marked with arrows pointing to main sights such as St Mark’s Square  Rialto Bridge, and Accademia Bridge) and take our time to really enjoy this unique city of water!  Venice is one of the best cities for photographers in my opinion because every canal and every angle is unique on their own way!

I love this old man’s art stand in front of the church!

Little canals were filled with gondolas….

Have you ever got frustrated by tourists that keep getting into your precious vacation photos? One way to avoid them is by taking the back roads…away from tourists.

I love the color of the old buildings with the green canal in between!

Somehow, we ended up at the Rialto bridge! There were filled with tourists…we had to wait at least 5 minutes to get a spot to take the famous postcard perfect photo of the Grand Canal!

The green and blue poles really caught our eyes, another angle to take a photo of the bridge.

At this time, it was already noon so we stopped to have lunch. Yep, we followed the recommendations to avoid the restaurants along the Grand Canal near Rialto and with waiters standing outside to tried to pull you in!  Instead, we walked a few more streets pass Rialto and saw a restaurant with the Trip Adviser sticker! You really can’t go wrong with the Trip Advisor sticker haha! The restaurant’s name is Osteria ai Storti. We ordered the tourist menus: seafood pasta of potatoes and spaghetti with clams with a large salad. Food was okay and total cost 26.5 euros which is not bad for Venice!

After lunch, we strolled down to the fish/fruit market area of San Polo; we didn’t get a chance to navigate this far last time we were here.  This photo was taken on the end of the market area and on the back of Rialto bridge, not the typical Grand Canal view from Rialto but another colorful side of Venice!

We walked back heading toward St Mark’s Square area and stopped by for what’s better on a hot humid day than gelato!  Averaged price for two scopes was 2.5 euros, the gelato shops around St Mark’s Square cost 1 extra euros and not as good!  I picked my favorite flavor….tiramisu!! Ahhhh so creamy and refreshing, one of the food that I missed from my last trip (gelato and pizza).

We didn’t noticed the Lion of Venice three years ago until I saw many photos of it afterwards…we found it this time, right at the Manin Square.

Instead of heading back to St Mark’s Square to catch the ferry ride back to Hilton, we decided to across the Accademia Bridge to head over to  Dorsoduro and take the ferry there. The view of Grand Canal from Accademia Bridge……beautiful! When we were at the bridge taking photos, there was a guy who offered people to take photos of them…we thought how nice of him….until……..right after the photo he asked people for 1 euro!!! Beware of this guy, we saw him again at St Mark’s Square near the Bridge of Sighs too!

We never spent time over at  Dorsoduro last time we were in Venice and so glad we did this time! It was not crowded like St Mark’s Square and we enjoyed the quiet side of Venice with gorgeous scenery! We walked to Santa Maria della Salute, this beautiful building that we passed by so many times but never had a chance to walk in. Here’s a photo of the interior:

There were many people sitting outside on the steps of Santa Maria della Salute, the view of the Grand Canal here was another good spot for photos!

We sat here as well to rest for a few minutes and enjoy the great view of Venice.  I turned back and saw the structures on the exterior of the building and was amazed by it.

We took the ferry back to Hilton and get ready for the fireworks…it was around 7 pm and the fireworks started at 11:30 pm. I have been looked for a restaurant with a good view of the fireworks but ended up either all restaurants with good views were booked months ahead or too expensive (Hilton’s Skyline Bar dinner menu was around 320 euros per person!!!!) We walked down Giudecca and checked out each restaurant…everywhere was booked!!! Locals already marked their spot and setting up their table along the river bank!!

We walked passed the Il Redentore church and the bridge of barges was filled with people walking from  Dorsoduro to Giudecca.

It was crowded..it reminded me of new year’s eve party! It was really a big party here, locals have their table set up, drinks, music, and dance!

As we walked around, we found a spot in between locals’ marked spot….very lucky! We decided to sit here and wait for 3.5 hours for the fireworks!  There was no way that we could come back later and find a spot where we have a nice view of the fireworks. I sat down holding the spot while hubby went back to the hotel to get our camera and tripods for the show! It took him at least half an hour to get back…it was that crowded! We skipped dinner that night 🙁 but it was well worth it!  There were food stand around the church so hubby bought panini and water. We waited and waited, sun had set, and party began! The wait wasn’t too bad as there were many people-seeing and music.

I was checking my cellphone for time every 15 minutes or so!!! And just a few minutes before 11:30, all the lights were turned off…the show began! The fireworks was spectacular, the best I’ve seen! No idea how to describe, you have to be there to feel the atmosphere around and the colorful reflections on San Marco’s Bay.  Here are photos to share with all of you!

The half hour fireworks felt like a long time with surprises every stage of the firework show. The hours of wait was well worth it and we were so glad that we made it to Venice at this very unique festival!

After the fireworks, we walked back to Hilton…took us like half an hour since everyone was making their way back! When we got back to the hotel, we showered and right to sleep LOL, it was a long night! Good night Venice, will explore you more tomorrow!