Having breakfast with our flashlights was a first! We had to wake up at 4:30 am and breakfast at 5:00 am before the sunrise; the solar lights in the dining room already went out of power so we luckily we had our flashlights. Breakfast was the same basic thing as previous day – eggs and bread. We left before 6:00 am to start our last day of the tour; a long way back to Uyuni with stops at various locations. First was all the way up to the volcano crater at 15,000 feet in altitude! OMG the air was so thin up there that made us all had light headaches even we took the high altitude sickness pills. The landscape was like other craters we had been to, smoke coming up the ground, and bubbly geysers. We weren’t impressed as we had seen more beautiful geysers in Iceland and Yellowstone 😛 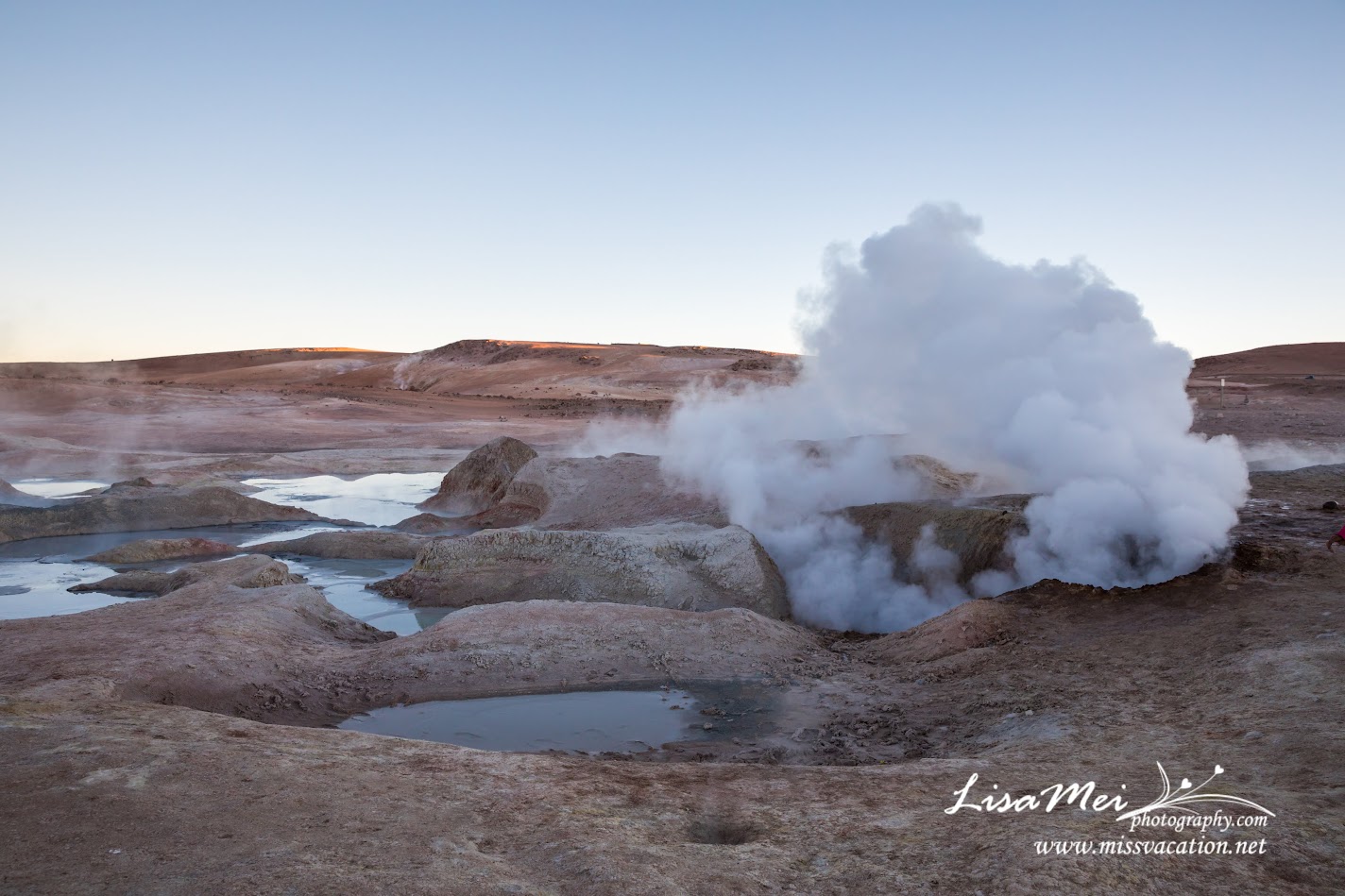 It was so cold up there and the sun was rising…we didn’t stay for long and hop back to our car so we can go to lower grounds! 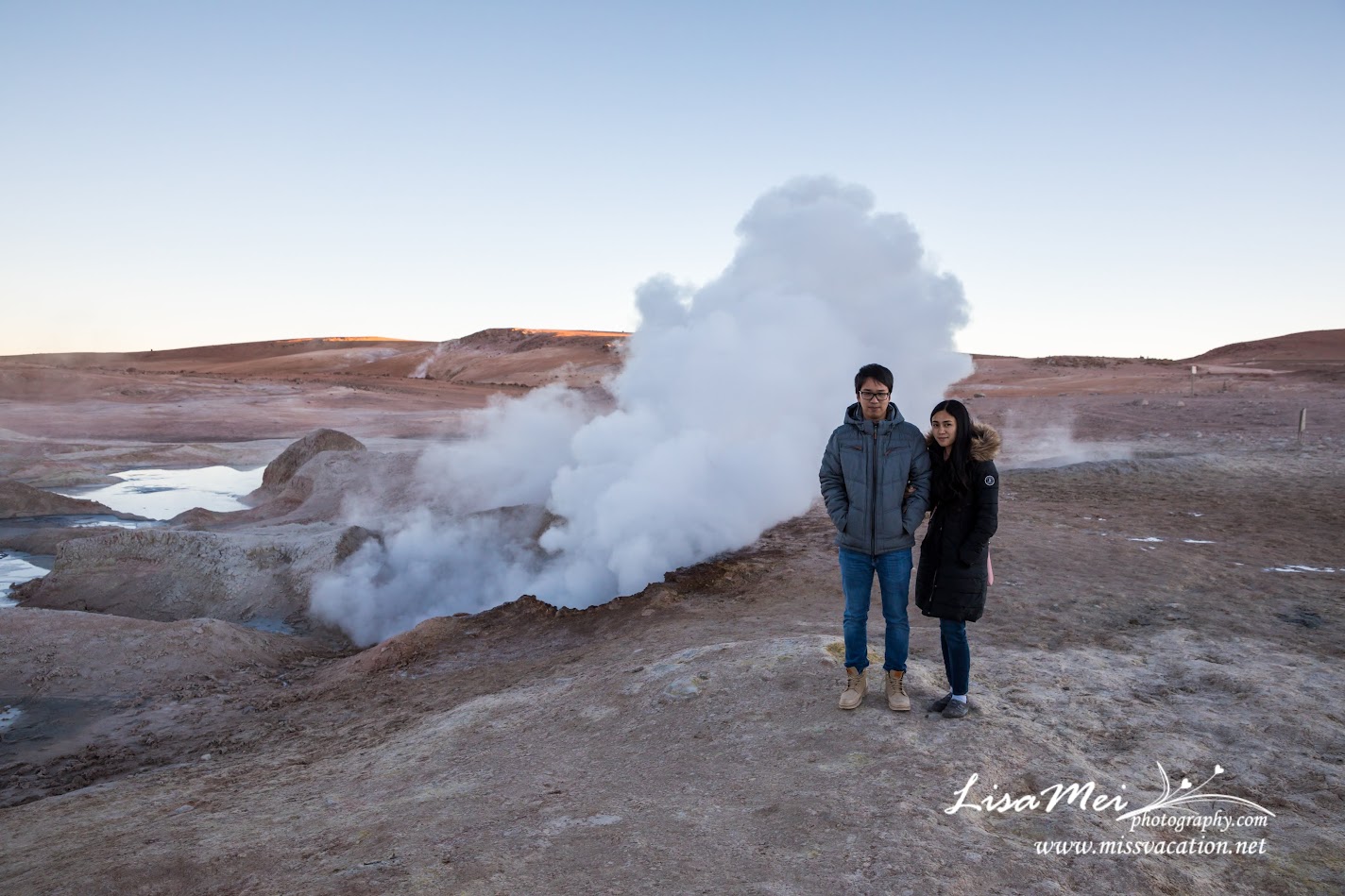 An hour drive or so we passed the “hot spring” where we made a pit stop and can take a dip. The bathroom there was the nastiest bathroom ever that I had encountered in my whole life…..from someone who had lived in a rural Chinese village!!! Even worst, it was a paid toilet too, what a rip-off!!! As soon as I entered the toilet facility, that urine smell was so strong that I tried not to breathe in. At one point, I thought I was going to faint by the smell, it was that terrible! I did my business as fast as I can and ran out OMG! When I met with my husband, he said he wants to throw up when he was in there by the smell! Jason has a high tolerate rate and he couldn’t stand it. Please save your few Bolivianos and go find a tree to do your business instead of this place!!!

Given the situation of the toilet, we did not trust the hot spring. Jason went over to take a photo of the hot spring and he said pass! When we were the number of people dipping in there in such a small “spring”, no way we wanted to dip in there! We told Tina we’ll pass on the hot spring and so we continued on our bumpy ride to the colorful desert which they called “Salvador Dalí Desert” named after the famous Spanish painter – Salvador Dalí. 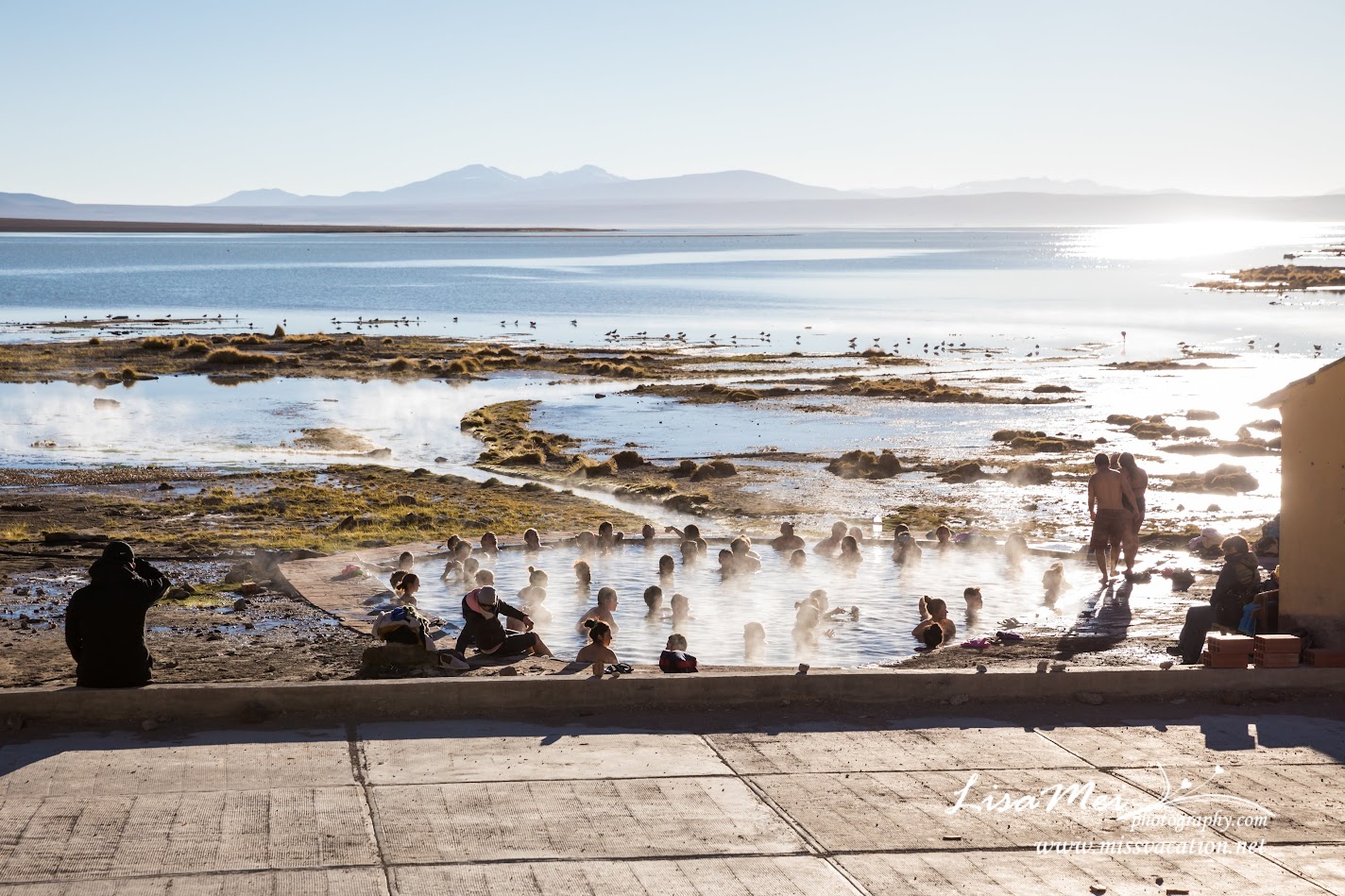 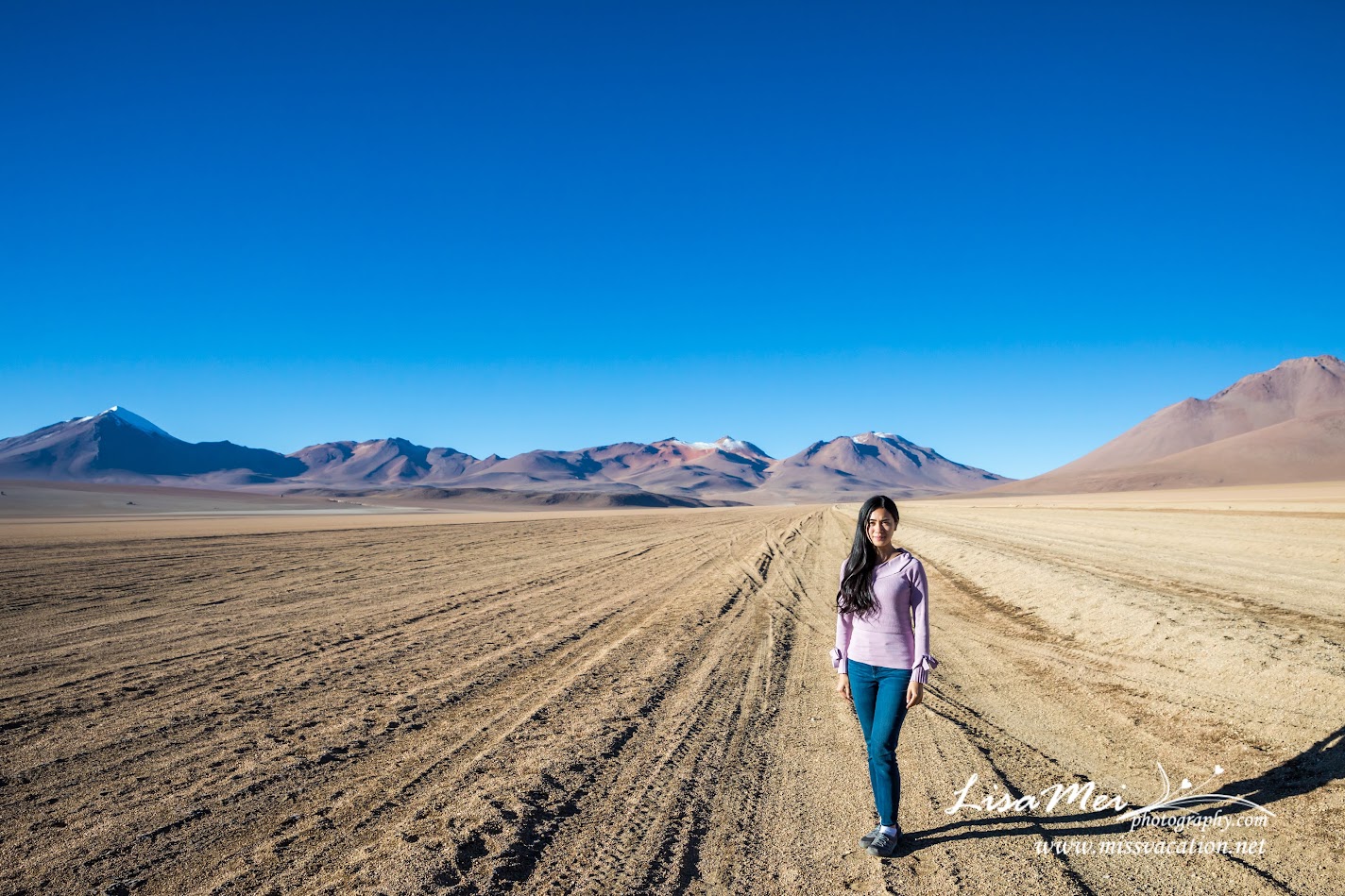 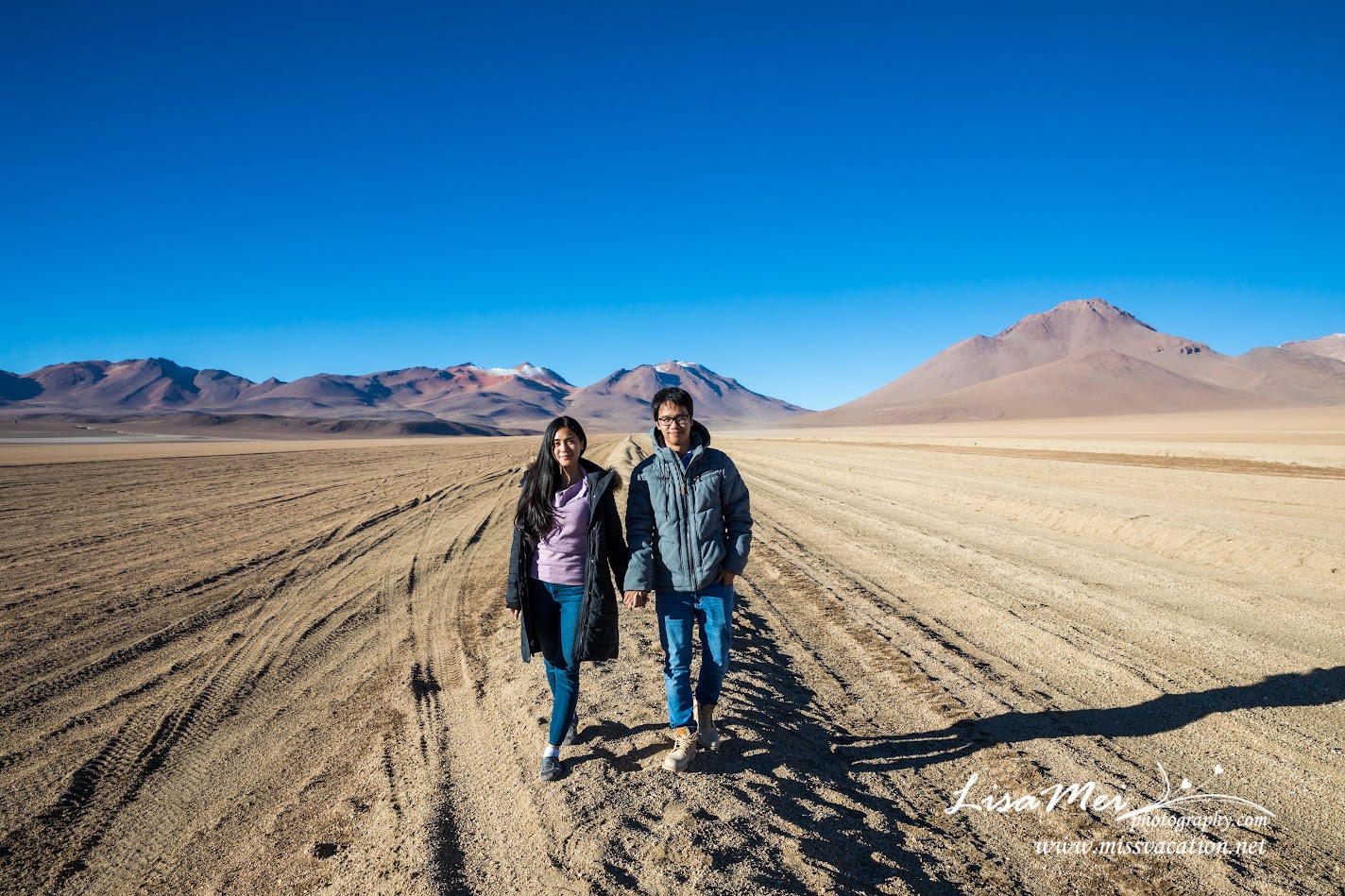 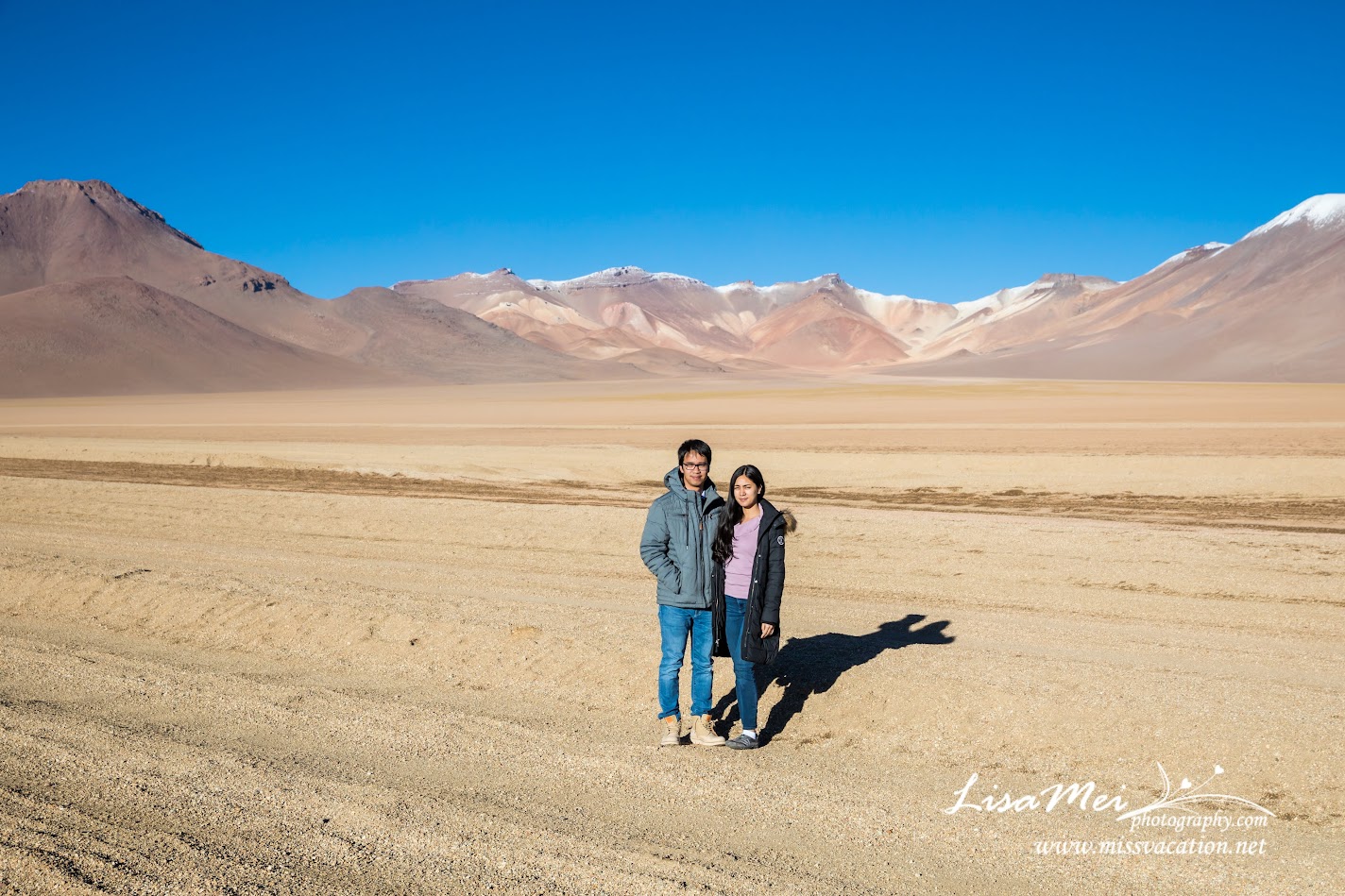 We continued on this bumpy gravel ride to Laguna Verde. This lagoon is famous that at a certain time of the day when the sun heats up the minerals in the lake that the lake turn green which its name came from. I heard it happened around 10 am in the morning but we didn’t have time to stay that long to witness that awww!!! 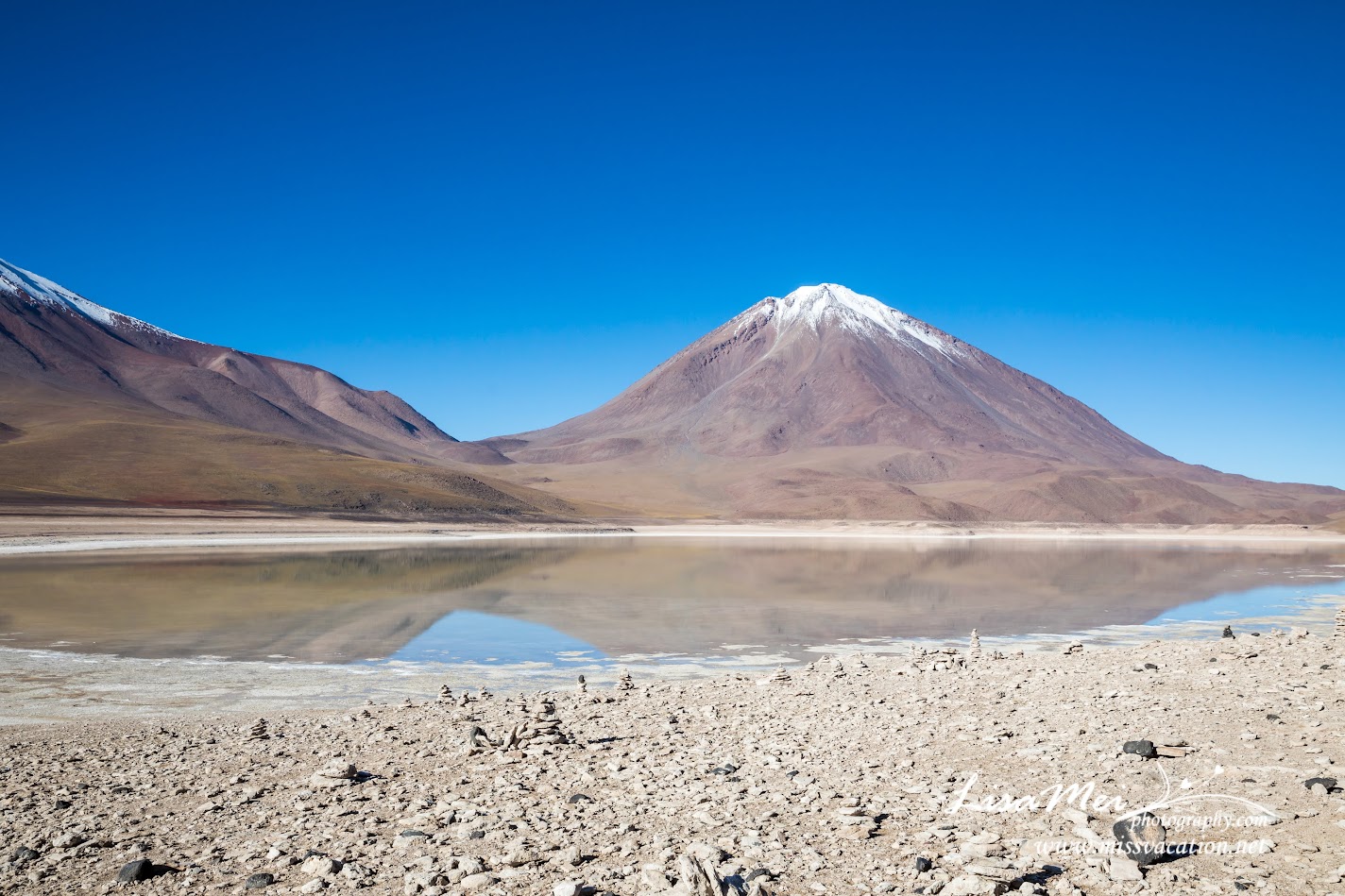 There are no flamingos in this lagoon and instead plenty of rocks! 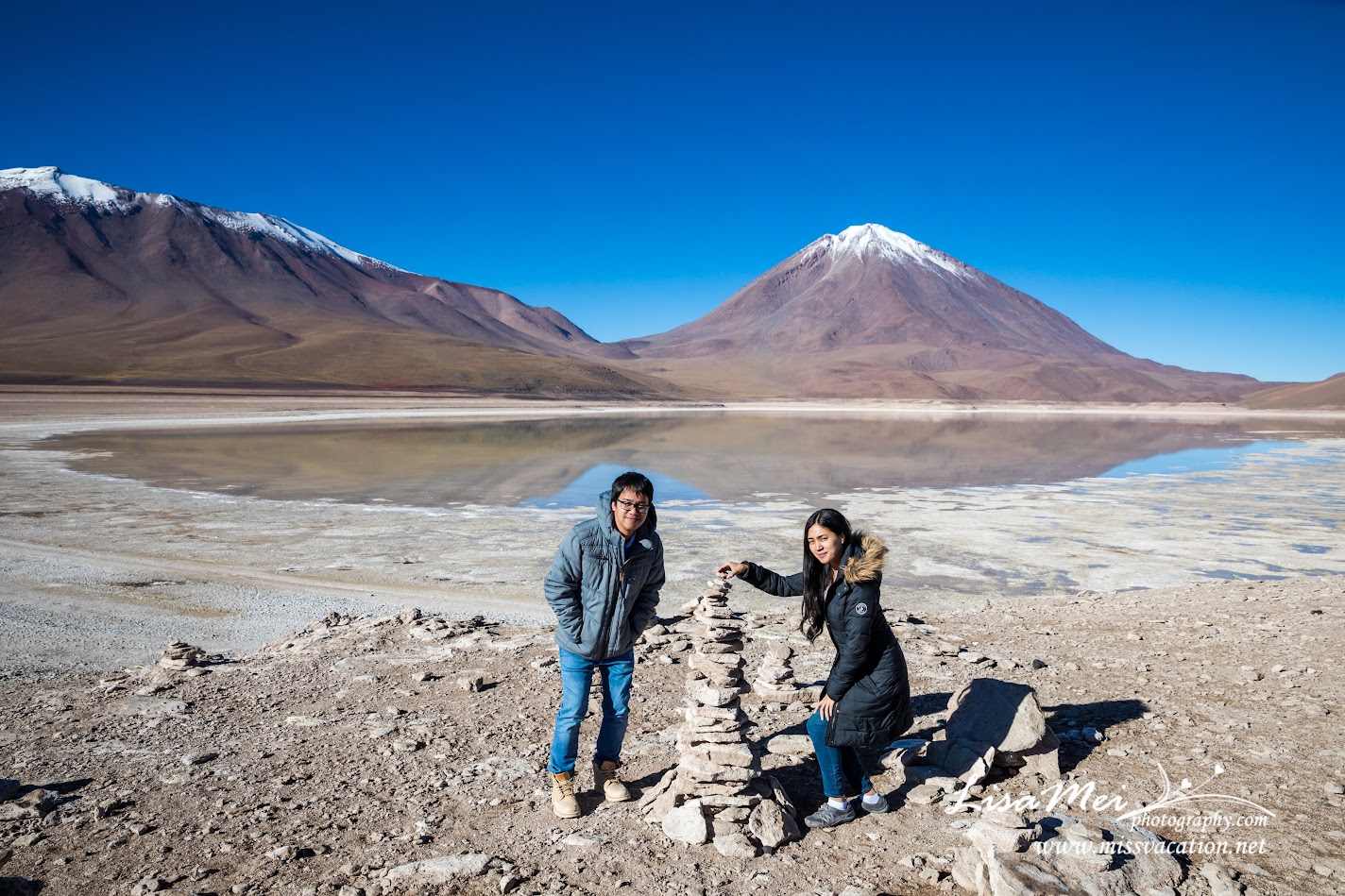 Next to it is the White Lagoon that doesn’t look anything special to us.

After the lagoons, we started our long ride to get back to Uyuni….more than 4 hours! I was a little disappointed that we didn’t get to see Laguna Colorada so I asked Tina if it’s anywhere near here. She said there’s a viewpoint on the way that we can detour to see if we like. I said yes that’ll be great. I had no clue how they manage to find the way and by the bumpiness of the road that not many cars on this road. We got to the “viewpoint” and it really showed how large Laguna Colorada is! 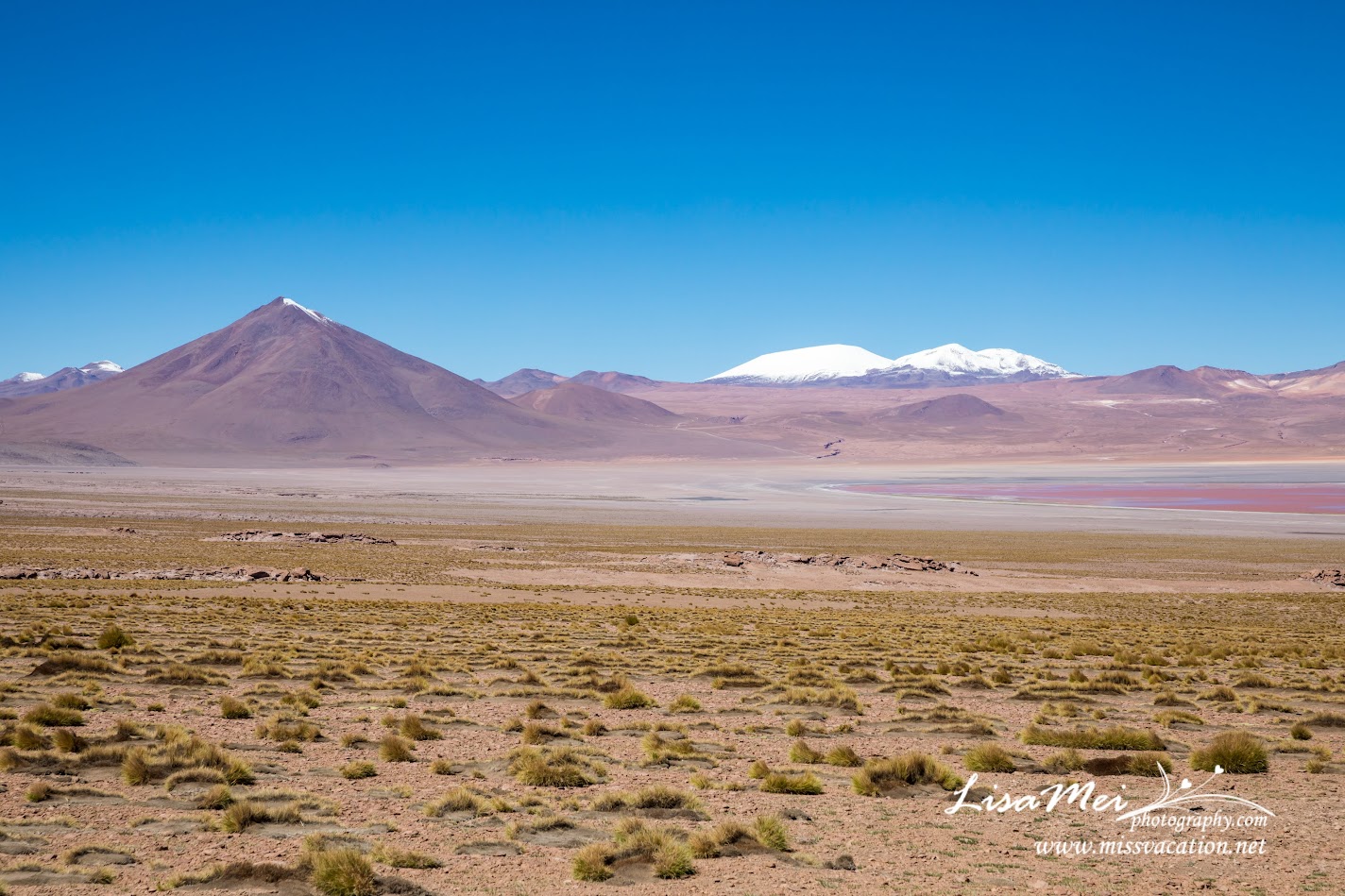 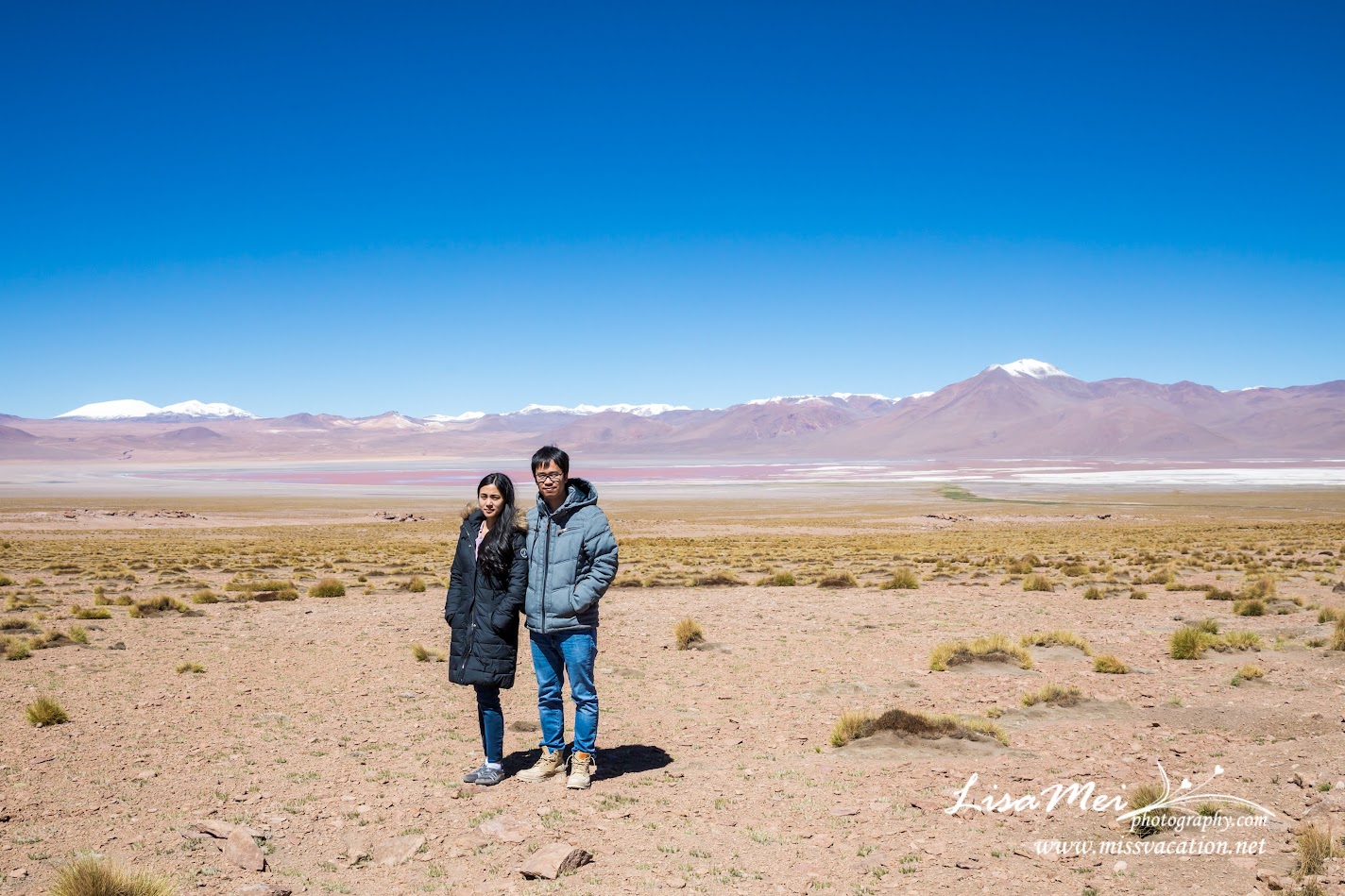 Too bad it was not as near to see the flamingos. Instead, it looked like an alpaca farm there! 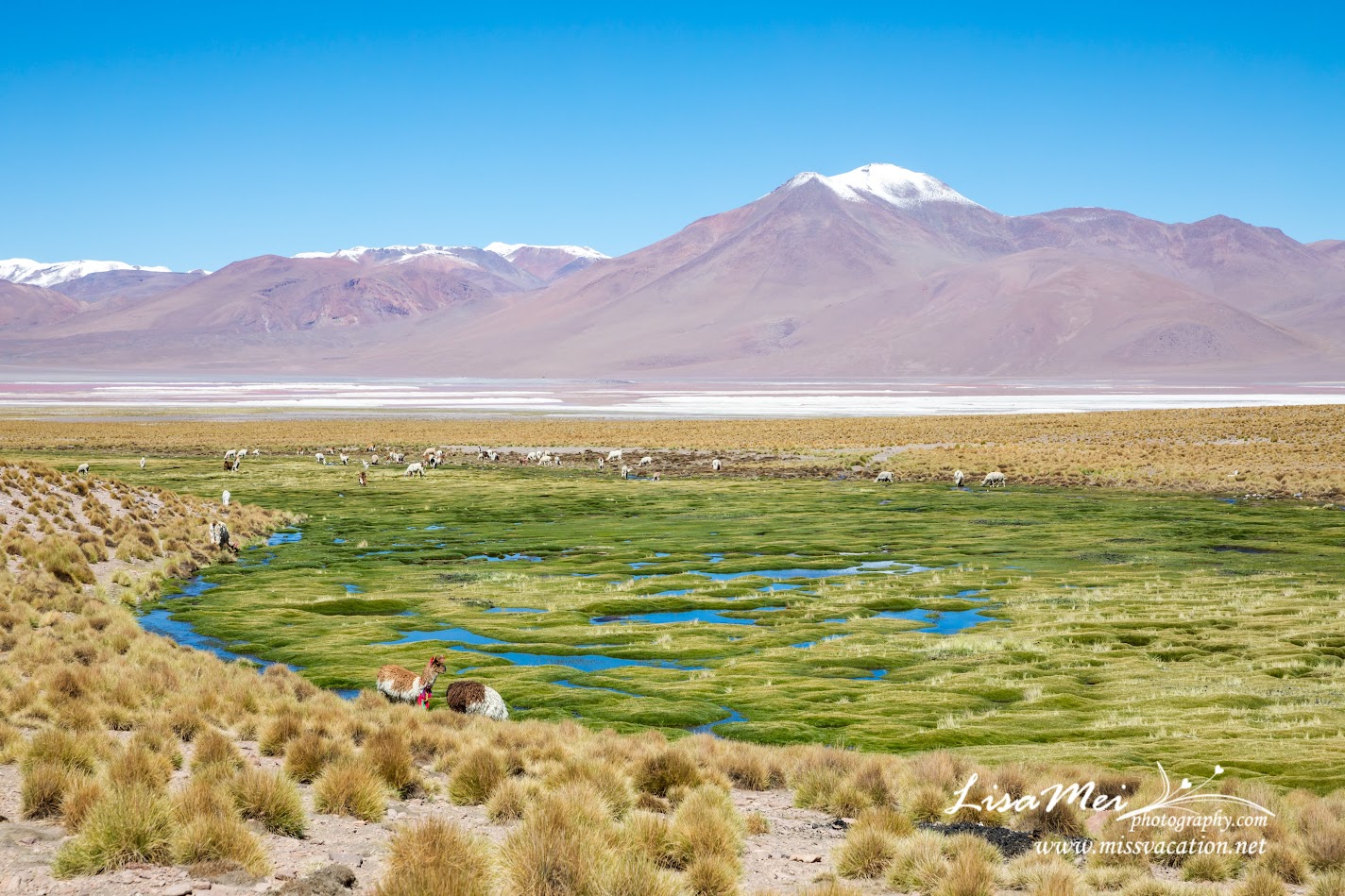 The 3-4 hour ride was painful….my butt hurt by the poor road condition! There was no other toilet on the way either and all the shrubs are so short that there’s no way the shrubs can cover me. Aren’t the boys lucky, they can go wherever! I hold it till we arrived at the village – Villa Mar for lunch. The paid toilet there was much better and flushes too. The little kid was the toilet guard that we paid him LOL. The village has a huge alpaca farm: 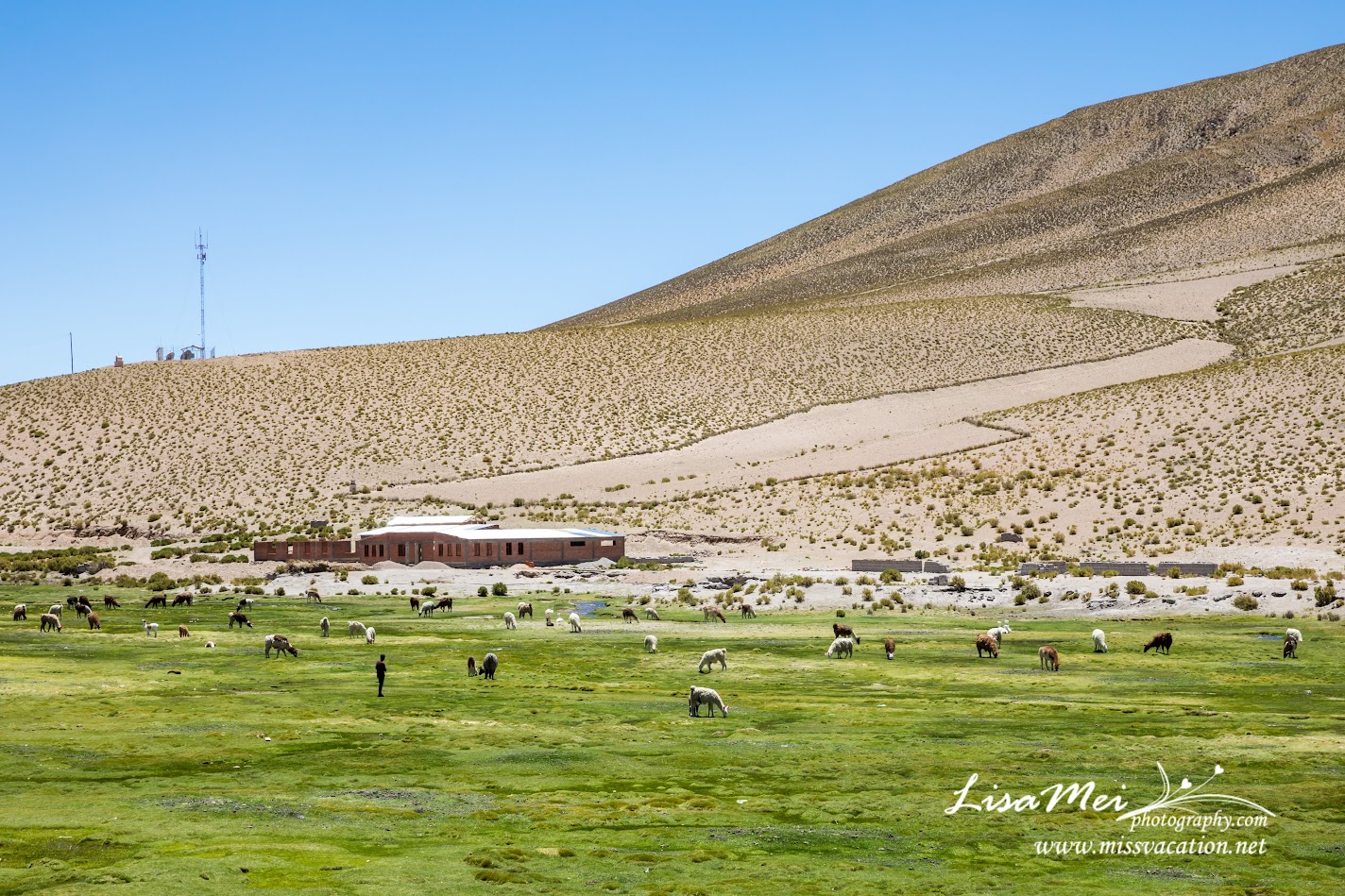 Many tours were there for lunch as well. 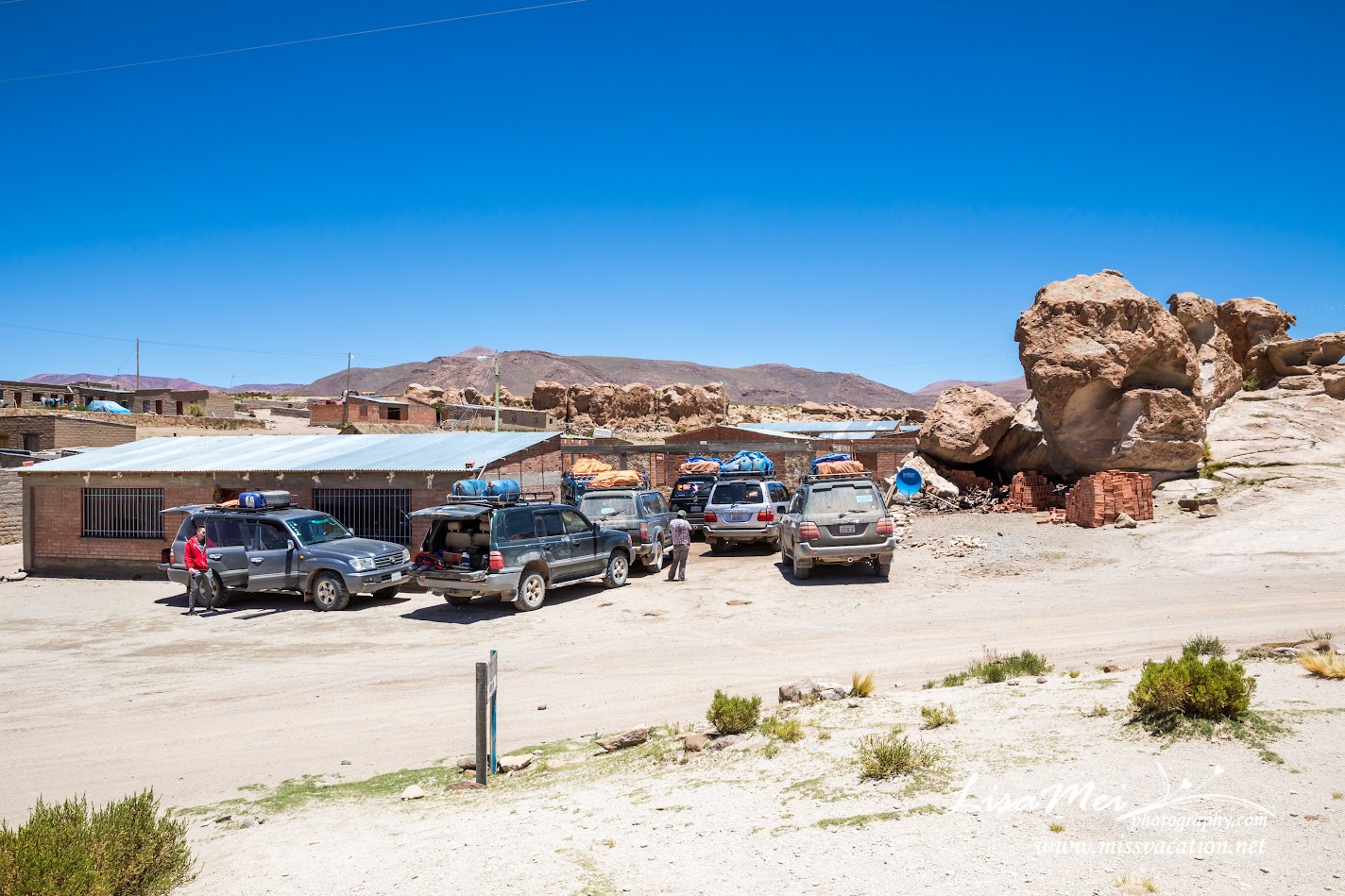 Lunch was tuna :O I wondered where they get the tuna from, it’s not like they are anywhere near the water. The bad news was I hate tuna so sighhh I filled myself up with corns, eggs, and potatoes. They have canned peach as “dessert”… 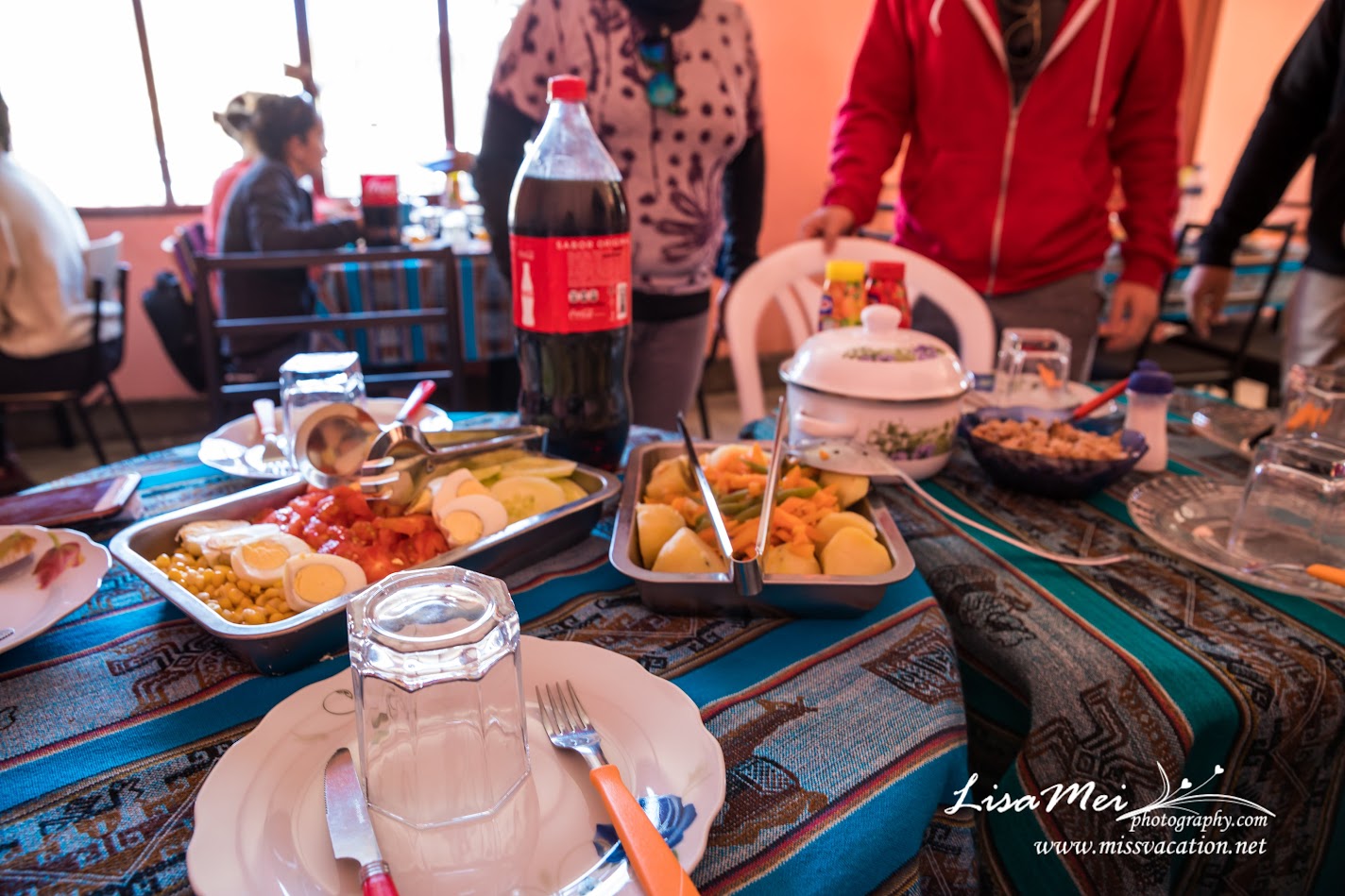 We got back at Uyuni around 4:30 pm and since our flight was at 8:40 pm, we had time to stroll around Uyuni town, have some food, before heading to the airport. The tour company was okay with us leaving our luggage there and will be back at around 6 pm for our ride to the airport. We tipped Tina and Freddy of 300 Bolivianos each that was all we had left in local currency. They thanked us and departed. We wandered around Uyuni town, it is a small town that we checked out all the souvenirs store in less than an hour. We picked a restaurant to have our dinner before heading to the airport. The food wasn’t great but the drinks were pretty good – I had the mango shake probably made from powder hahaha. It was around 35 Bolivianos ($5 USD) per person that we paid with our credit card. The girl at the cash register was so slow yikes!

We walked back to the tour office, picked up our luggage, and waited for our car to drop us off at the airport. The airport is a simple airport with a small cafe at the 2nd level with some seats. There is a departure tax that we need to pay for 11 Bolivianos per person, thankfully, I saved the 100 Bolivianos bill as a souvenir and ended up using it to pay for our departure tax 🙁 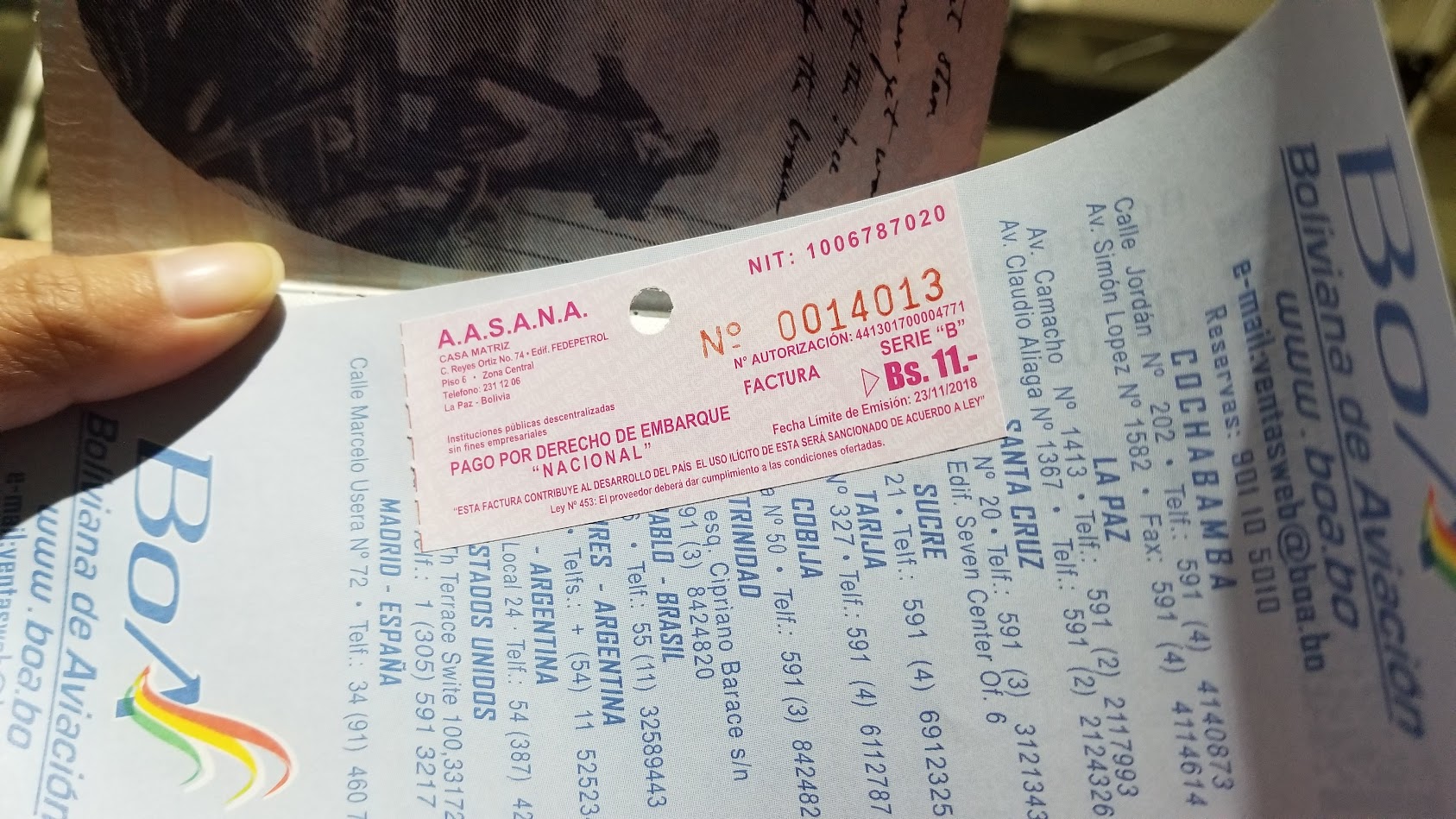 Our flight was on time and we arrived La Paz at 9:40 pm. Our international flight departs on the following day at 3:35 am so all the checkin counters were closed until 2 hours prior to departure which means we had a few hours in La Paz airport. There were limited seats there so thankfully we arrived early to secure a road of seats. There were some shops on the 2nd floor but nothing too interesting except for this papaya flavored Fanta! It has some papaya after taste but it was so sweet! 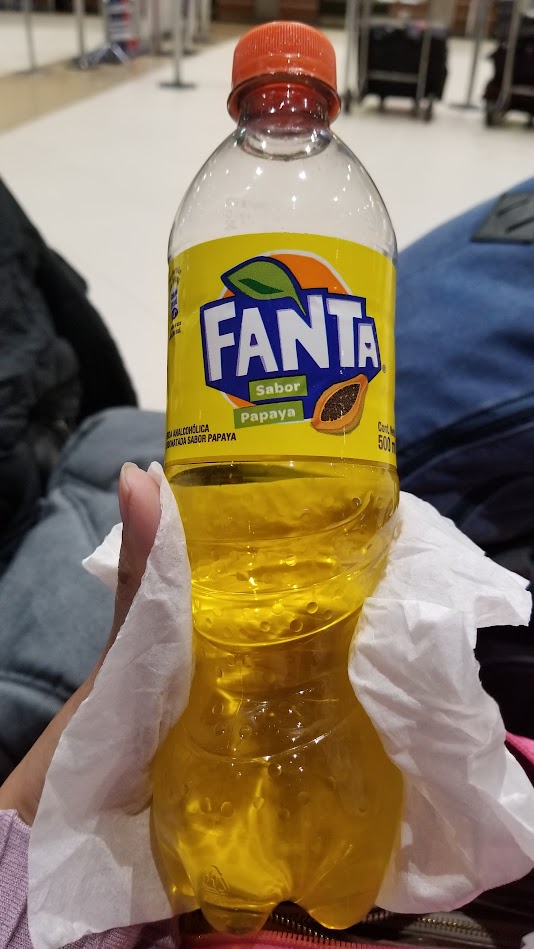 The counters opened very late and a huge line of people already lined up. We had to fill a departure card for the checkin as well. Because they opened very late that by the time we got our boarding pass and through security, we didn’t have much time to relax at the airport lounge. The lounge was small and no food item except for drinks so we didn’t miss out much. We took the Avianca flight from La Paz to Bogota, Colombia and then a nonstop flight from Bogota to Boston. The 4 hours flight, we were served a ham and cheese sandwich 🙁 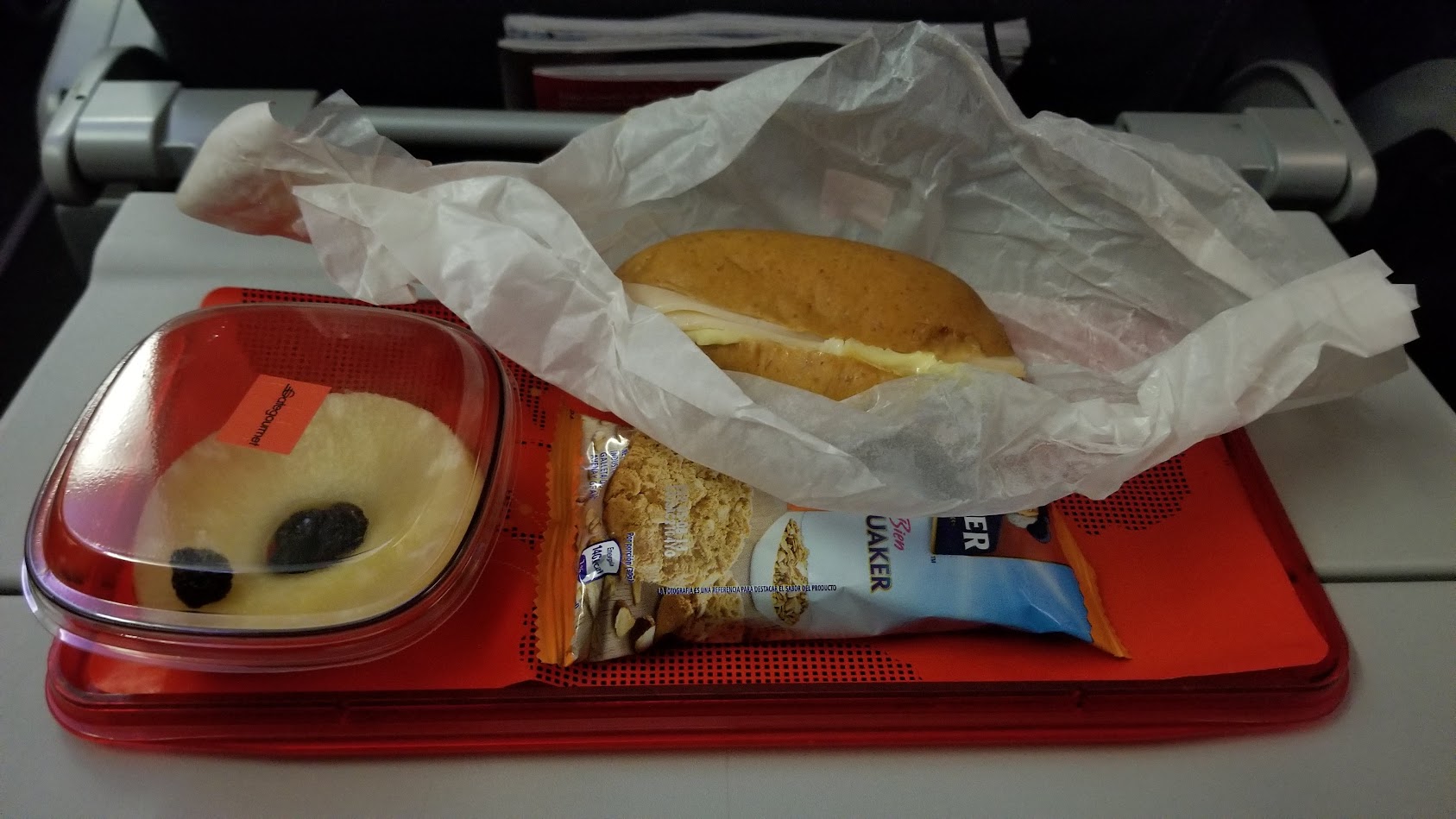 When we landed Bogota, Peter, Judy, and Jeffrey ran off to catch their flight to Quito, Ecuador where they have the 2nd part of the trip to Galapagos Islands! Jason and I were headed home after Bolivia due to no more vacation days 🙁 Galapagos Islands never on my bucket list – perhaps I am not into sea animals. We had 6 hours in Bogota and luckily there are 3 lounges in Bogota Airport that we hop around. First, we went to Avianca Sala VIP lounge and it was disappointing – no hot food at all. We stayed probably for 3 hours until almost lunchtime and decided to check out the Sala VIP LATAM lounge, it was much better!

The wraps were decent, fresh fruits, and plenty of choices of local soft drinks like this type of Tea (I assume te is tea?). It was sweet for a tea so I didn’t enjoy it as much even though the bottle looked cute. 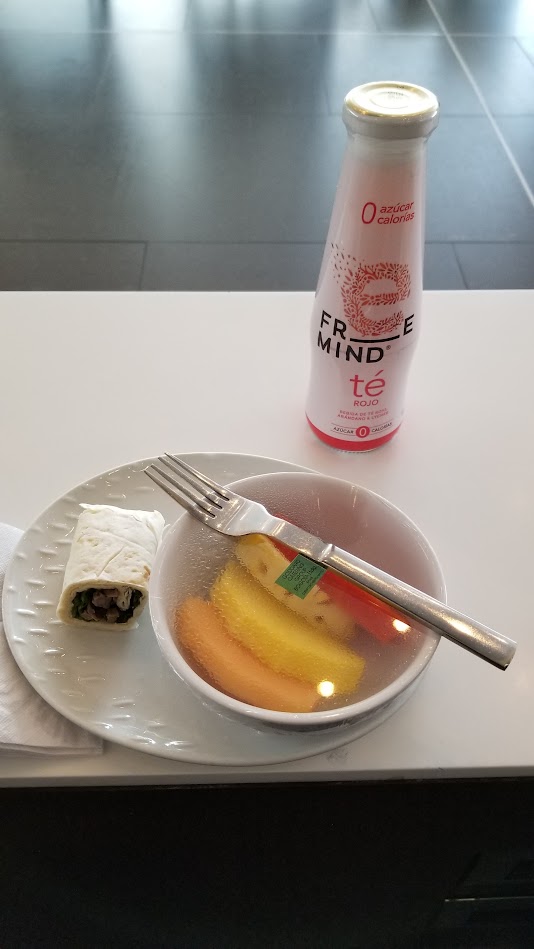 If you like ice cream, you’ll love this lounge!!!! 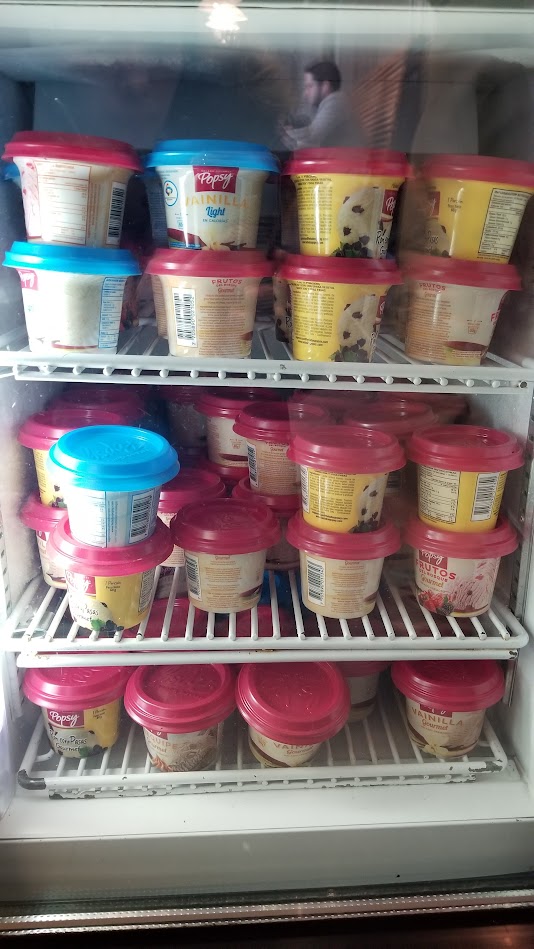 There’s also a back corner and comfortable chair to take a nap. 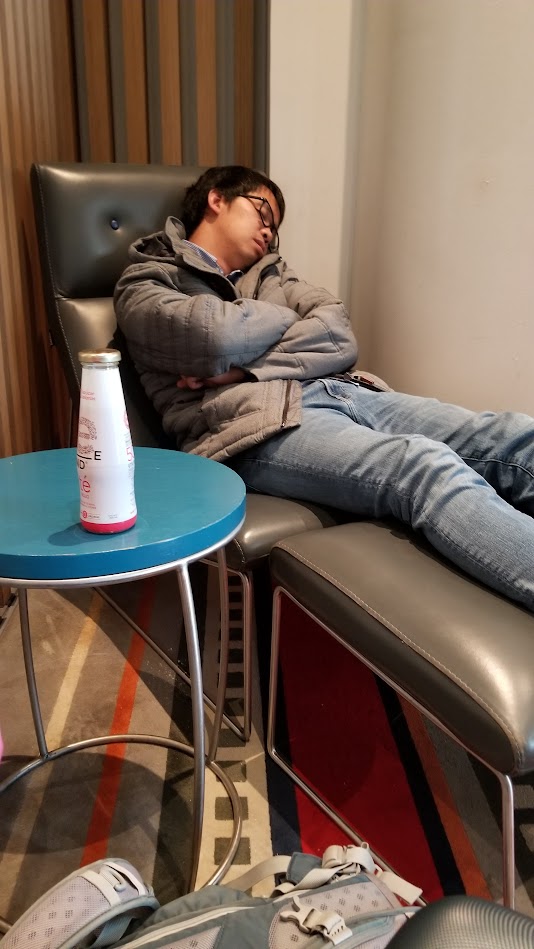 At lunchtime, the food choice was better and a soup (a little bit too salty so need to add water). 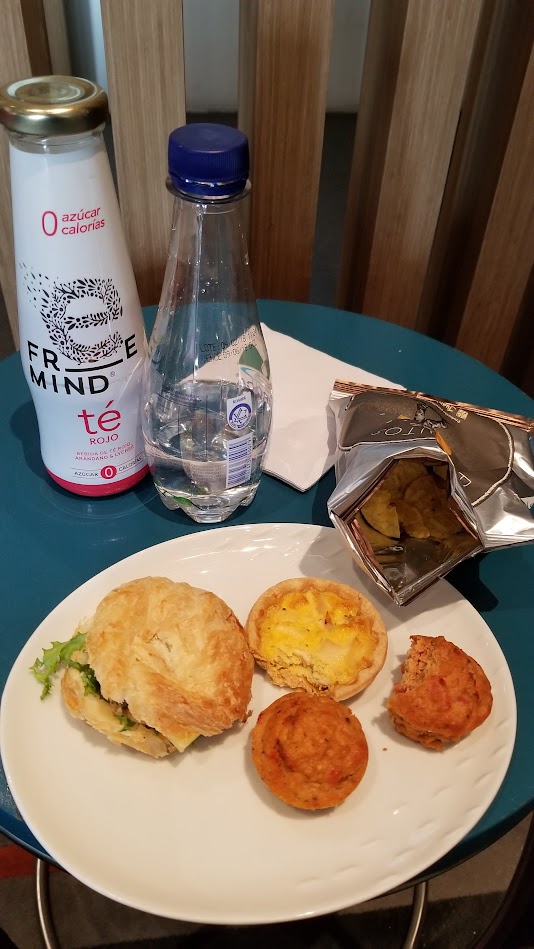 The flight home was smooth and we landed Boston at 9:00 pm. The next day, we had work and I told my coworkers that I went to Bolivia for the long weekend and they were like shocked LOL! I guess it does should a bit crazy!

Overall, the salt flat and the mirror effect did not disappoint. However, other than that, the rest of the 2 days of the tour was not worth the long bumpy ride. The different colored lagoons were nice but not extraordinarily beautiful. I rather tried again at the salt flat for a miracle that the bubbles will clear up or a sunrise and stargazing will be amazing. The infrastructure in Uyuni area was pretty poor. If you are looking for a comfortable trip, Uyuni is not for you. If you haven’t visited Peru, I would much recommend Peru over Bolivia – Peru has better infrastructure and luxury hotels to make your stay comfortable; see my Machu Picchu trip reports for details. Nevermind the fact that Peru has more shops and highly rated restaurants (Lima has 2 of the world’s top 10 restaurants); the food in Uyuni was just edible. But I was glad that we made the trip and got it checked off our bucket list. Recently, American Airlines has announced the end of the Miami to La Paz route sometimes this summer so if I was to wait for next year to visit, there is no way I could make the trip over a 4 days weekend as the flights will not align to get to Uyuni by 10 am to start the tour without costing an extra vacation day!