After all these years hearing people said how beautiful Prague is, we finally made it to Prague! This was our first time traveling to Europe at the beginning of September (we usually go during spring or early summer) when I saw crazy low prices nonstop from Boston to Barcelona with the newly launched airline – Level at $297 round trip! The flight was actually operated by Iberia, Level’s parent company and I love the plane’s configuration 2-4-2 and that they allowed us to select seats (for free!) during check-in so we were able to sit on those 2-seaters row. Many so-called “full service” airlines nowadays randomly assigned your seats at check-in and charge a fee to change your seats so I was very happy with Level. We landed in Barcelona Terminal 1 at around 9:30 AM, went through immigration and took the free shuttle bus to Terminal 2 for our Ryanair’s flight ($63) to Prague. Our flight to Prague was at 3:00 PM so we had plenty of time to make the connection and hang out in the Sala VIP Canudas lounge, free access with our Priority Pass. The lounge itself was nothing to rave about, at least they have hot food although only edible. Our flight was delayed almost an hour due to the incoming plane was late. We arrived in Prague at around 6:30 PM instead of 5:25 PM, took out some cash from the ATM, and proceed to the ticket counter to purchase our bus tickets. Prague has a simple public transportation fare system: a 30 min ticket cost 24 CZK and a 90 min ticket cost 32 CZK (less than $1.50). It took more than 30 minutes to get to the center so we purchased the 90 min ticket. We took the airport bus 119 to Nádraží Veleslavín and switched to Metro A to Malostranská. It is very important to validate and hold on to your ticket until you reached the final destination!

Once we got out of Malostranská metro station, it was like 5 minutes walk to our hotel, Hotel U Pava, which is located close to the famous Charle’s Bridge in the Malá Strana side (Lesser Town) or the castle side. Google Map wasn’t corporating grrr so we were guessing on the direction and luckily, we were right! When walking down those cobblestone streets, I saw rows of pastel-colored houses and my first impression of Prague was…wow it’s charming! Once checked into the hotel, we dropped off our luggage and walked to the restaurant, Restaurant Pod Vezi, that we were late from our 6:30 PM reservation. Even though we were late, there were still available tables. The waitress spoke good English and we placed the order for the beef ball soup, foie gras, roasted duck leg, and pork knuckle. However, our foie gras never came so the waitress must forget it!

My first impression of Czech cuisine – salty! The beef ball soup was salty and the beef ball itself wasn’t even tasty. 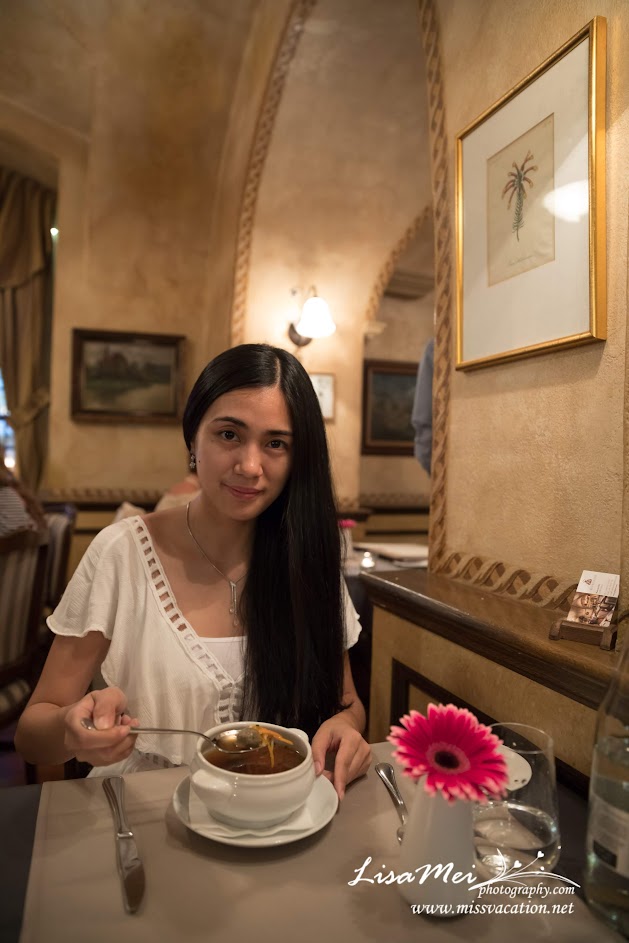 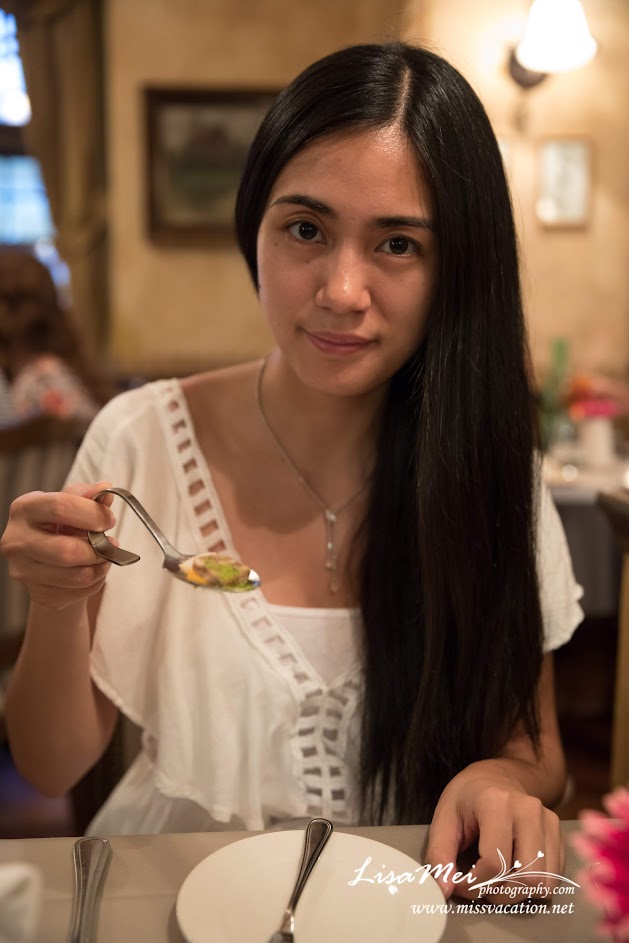 My duck leg was so salty OMG that I wish they can give me a bowl of rice to balance it out. 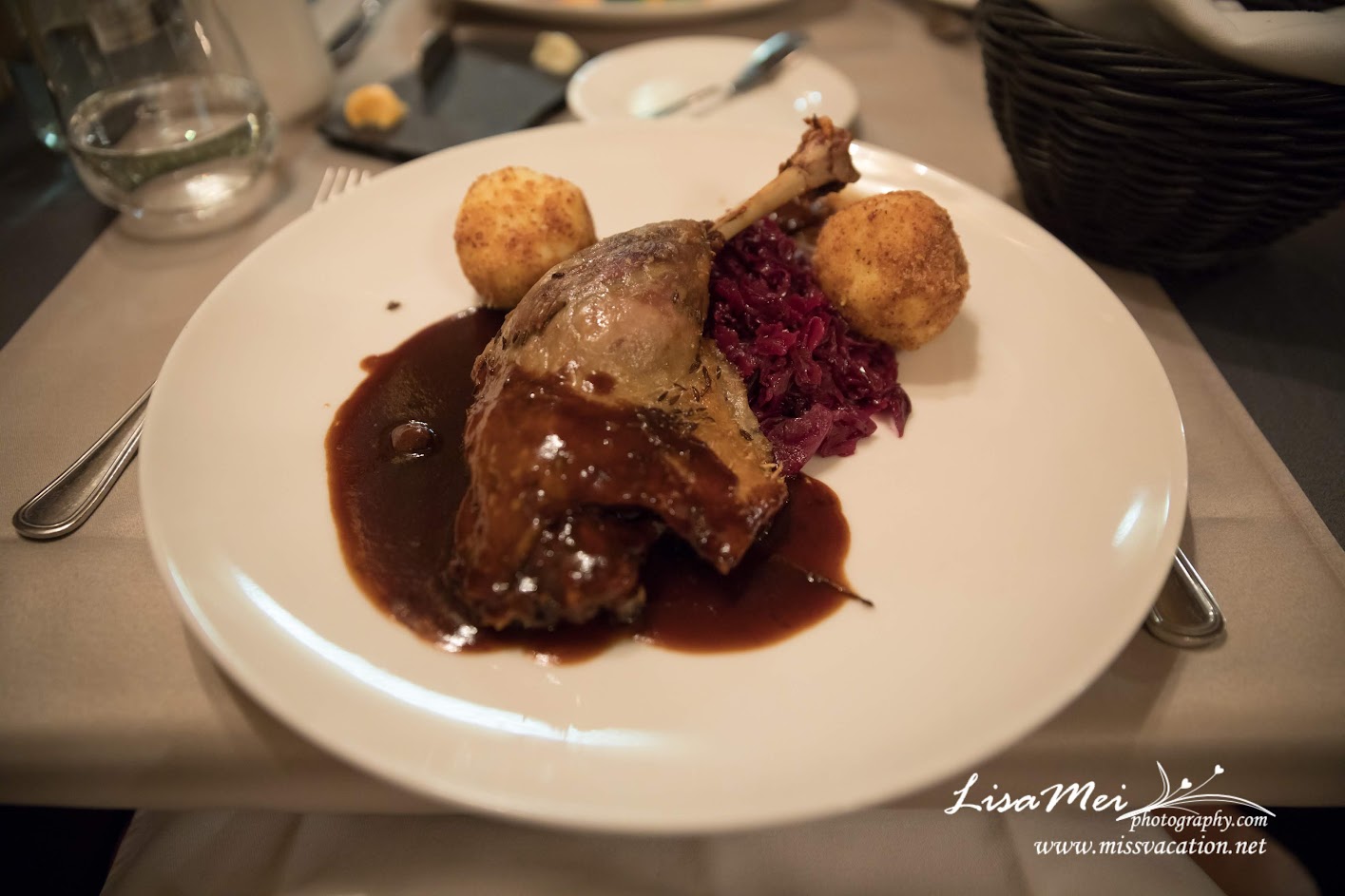 Jason’s pork knuckle wasn’t great either and salty. The restaurant has good reviews and many locals dine there so I guess just not our Asian taste buds. The dinner total was $47.70 and they accepted credit card. 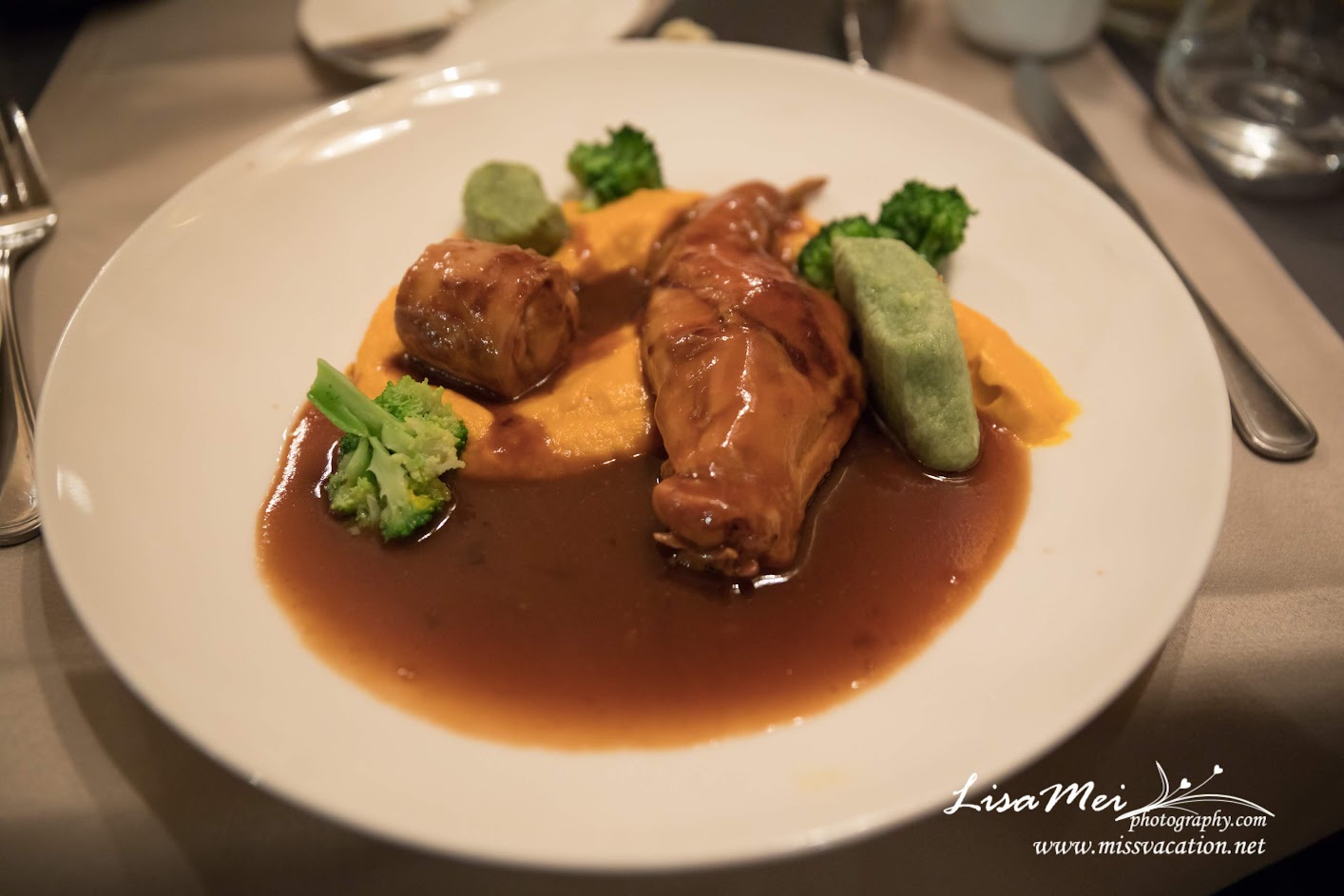 After dinner, we walked a few steps out to Charles Bridge and it was packed with tourists and vendors. The blue hour made the scene even more pretty, don’t you agree? The Lesser Town Tower at night: 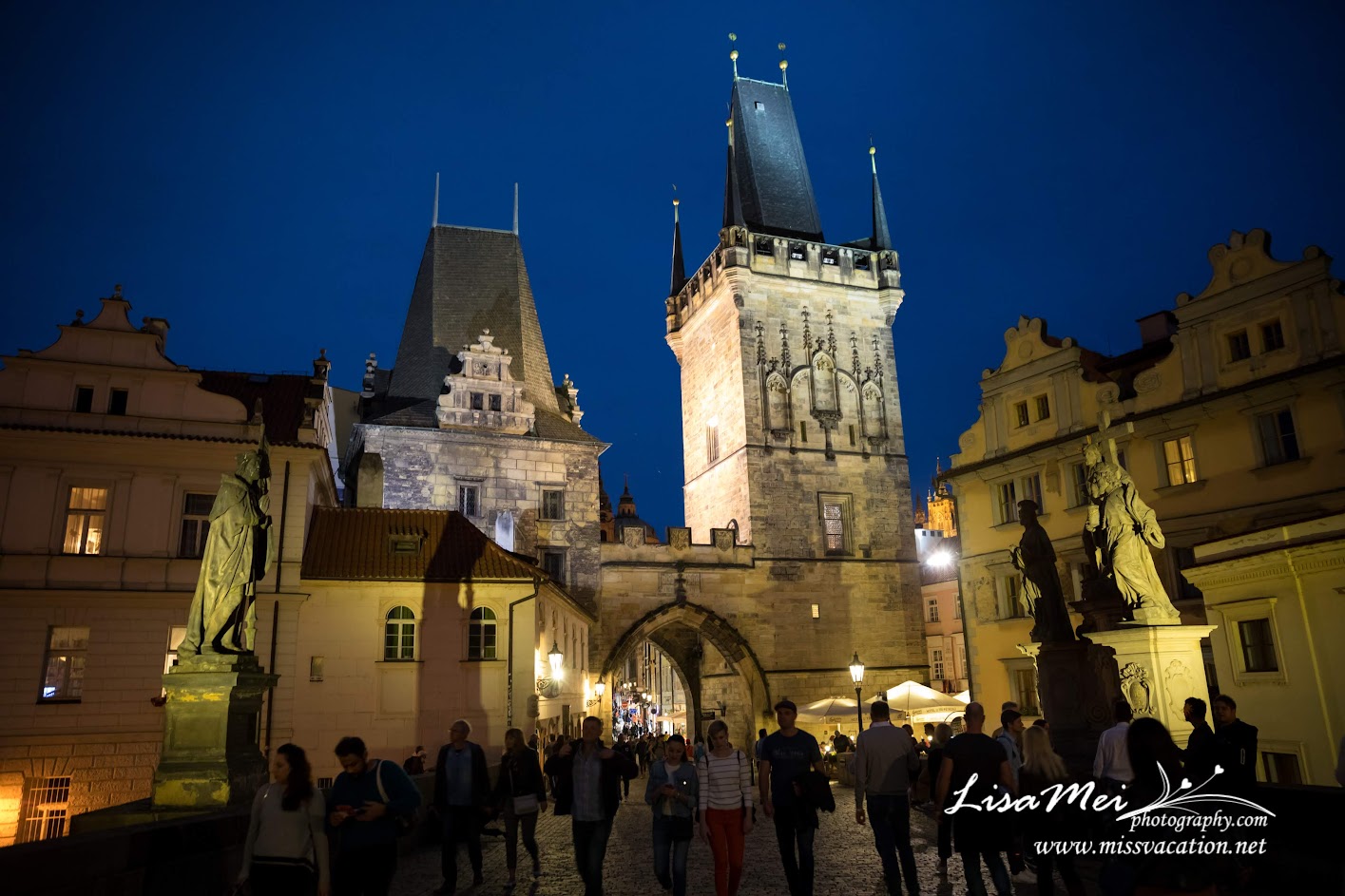 A group of musicians was performing on the bridge and the castle in the background added a touch of fairy-tale like to the atmosphere. Although it was cold, I can feel the warmth of the charming Prague. 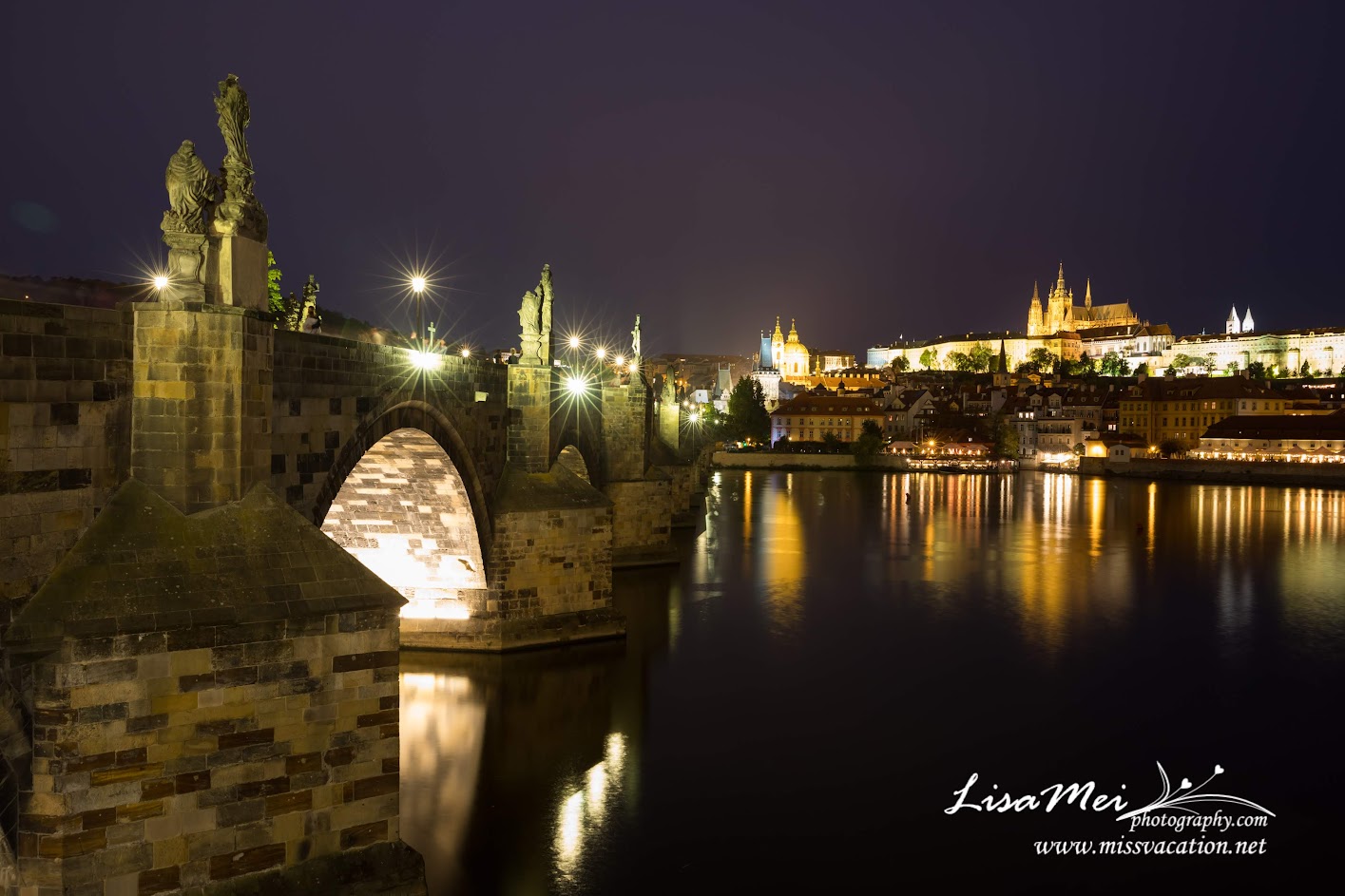 Across the bridge is the old town and it continued with more old architectures and churches. 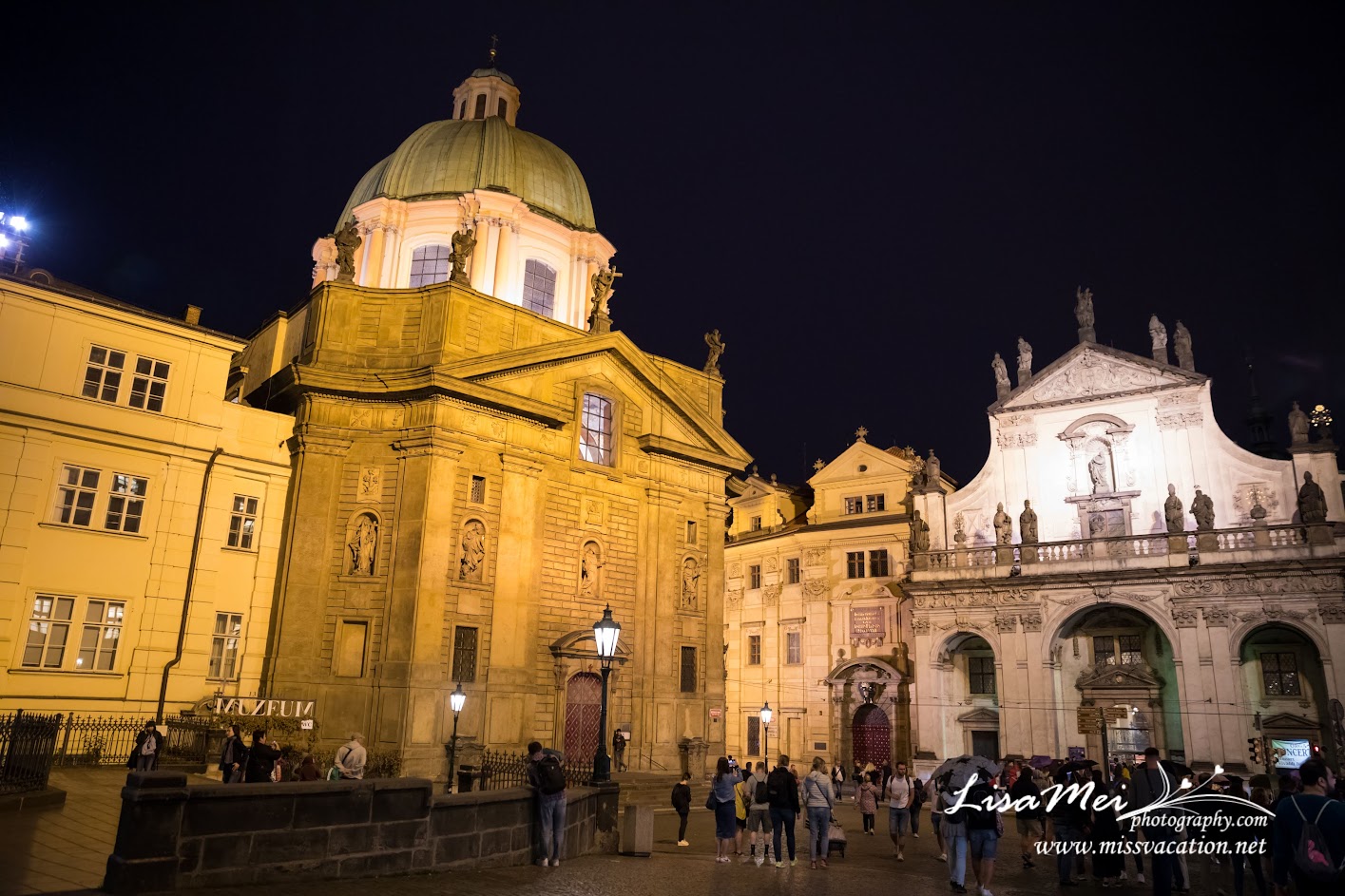 As we headed toward the infamous Astronomical Clock, Google Maps guided us through this main souvenir street where I saw this LED lighted bike: 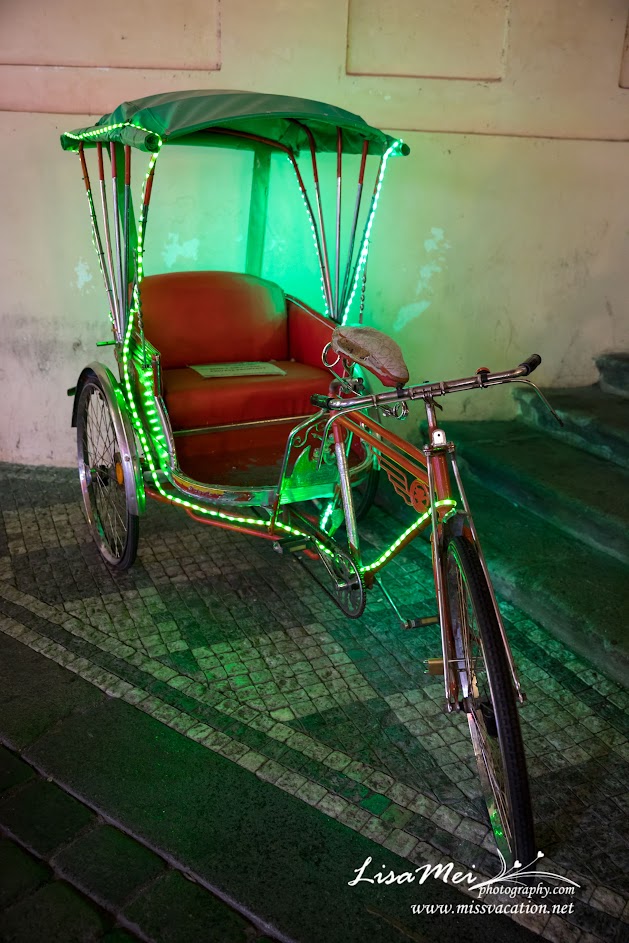 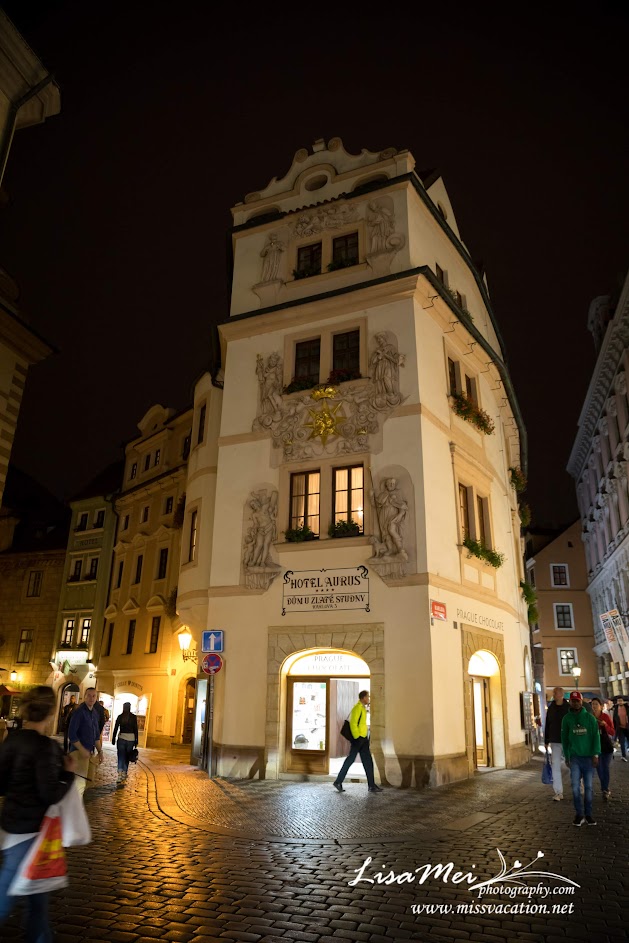 I was shocked to saw so many crystal shops (jewelry made from Swarovski elements)…I thought crystal is famous in Austria didn’t know it’s as popular in the Czech Republic. Also, glass shops are plenty as well. 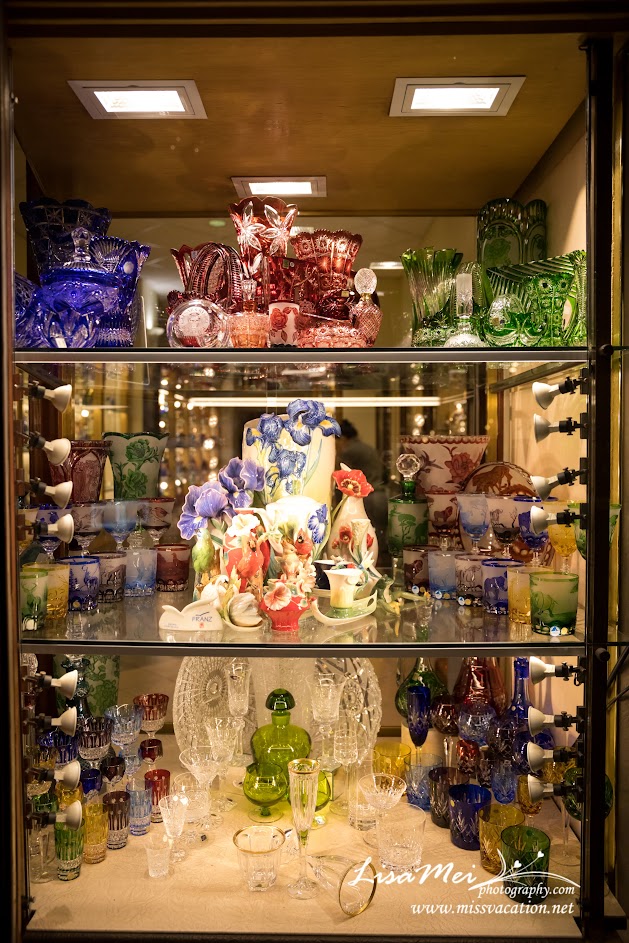 So many Russian dolls too! 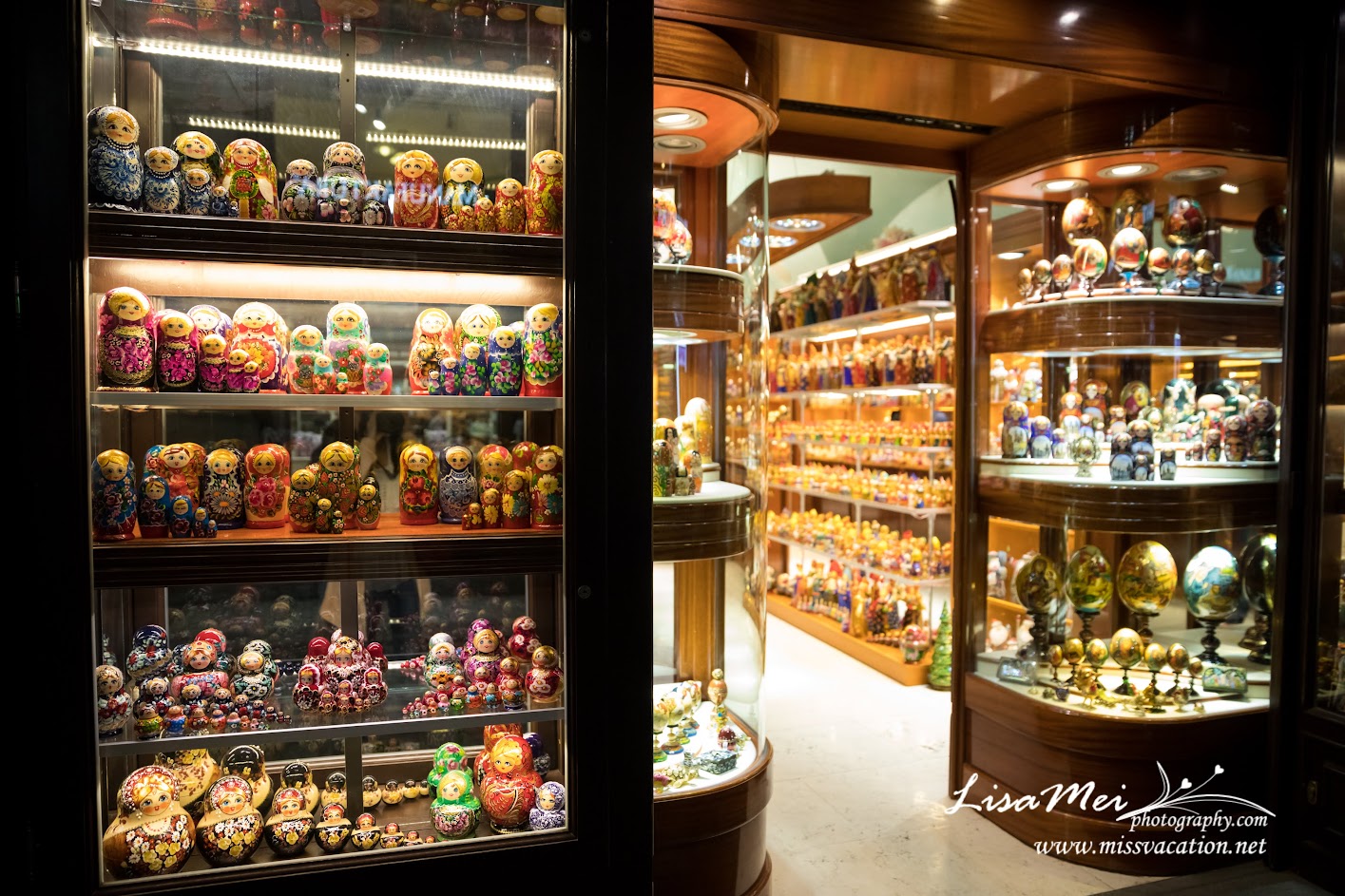 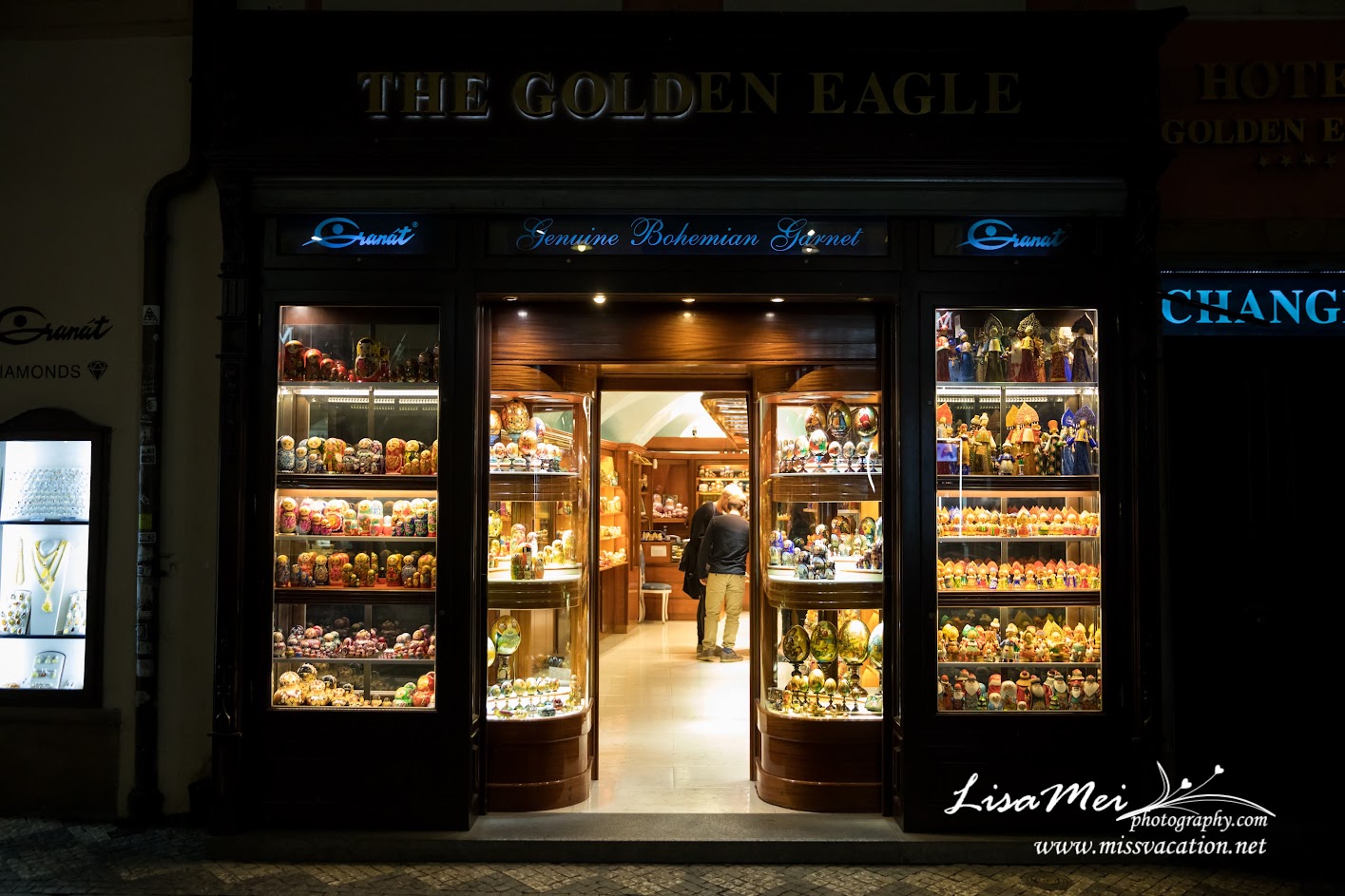 Finally, we reached the Astronomical Clock but it was covered with scaffolds!!! I heard about the renovation but I thought should be completed by end of August….awwww so disappointed 🙁 The Church of Our Lady Before Týn looked amazing at night! 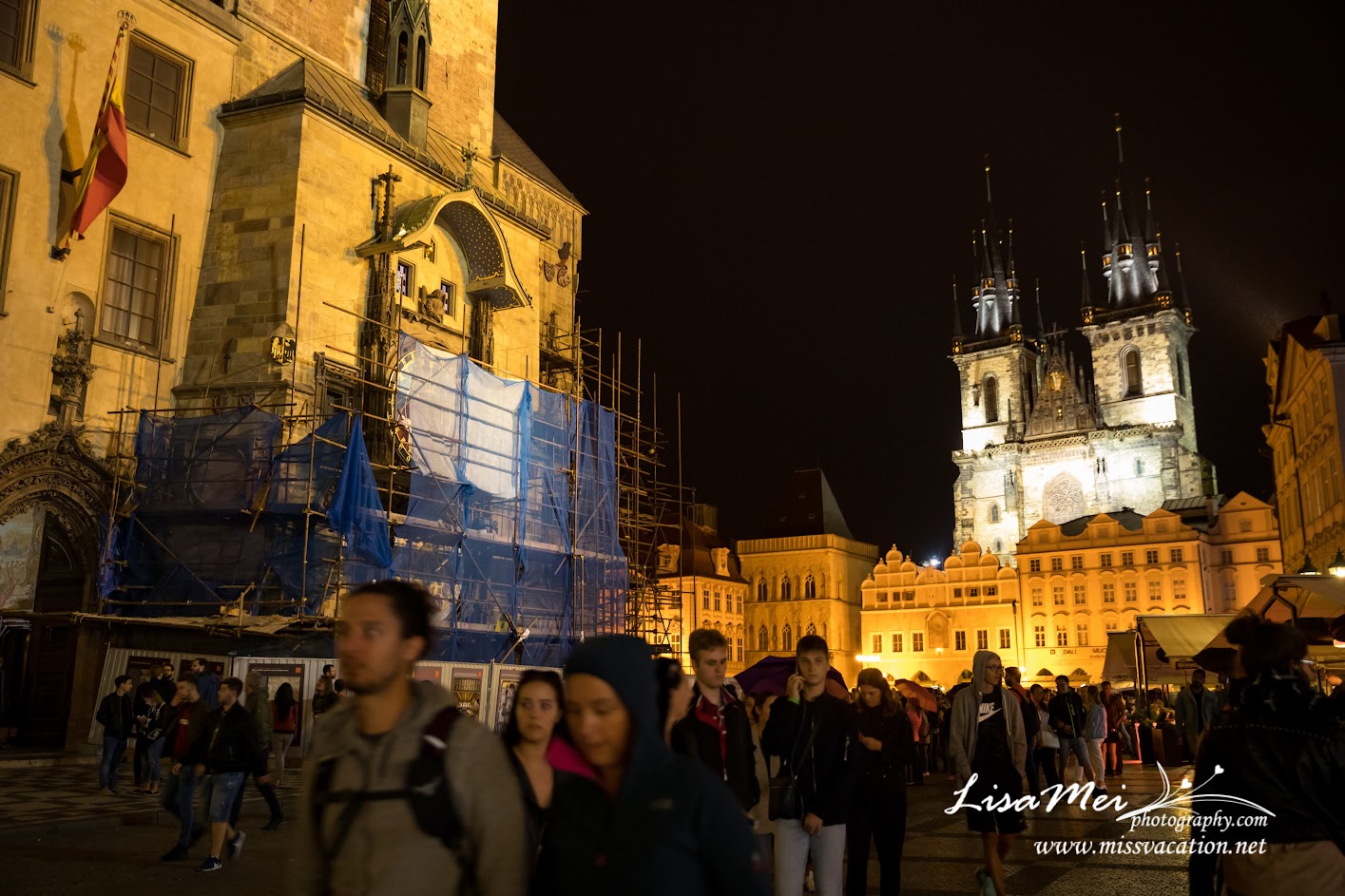 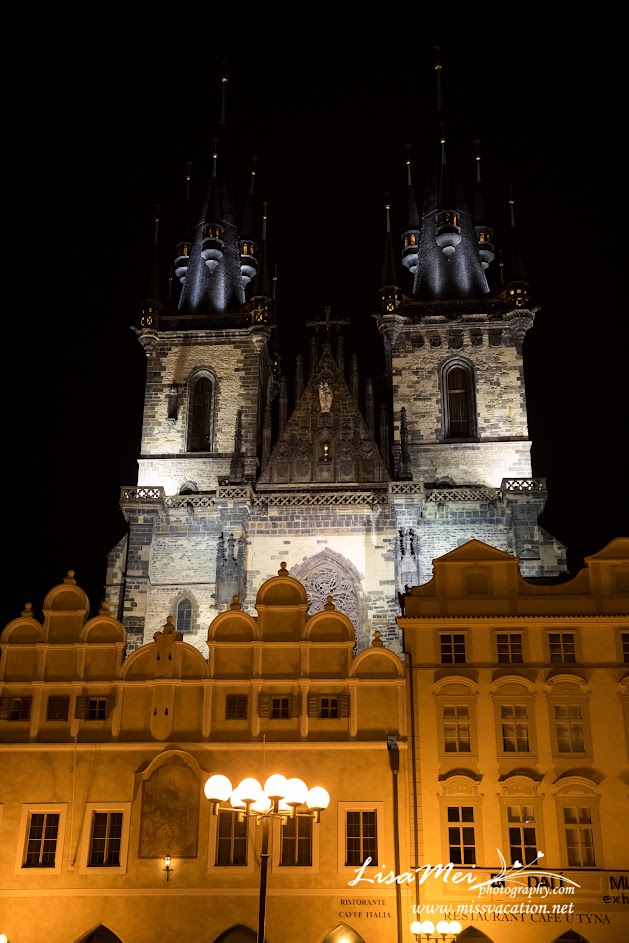 The old town square was lively at night! 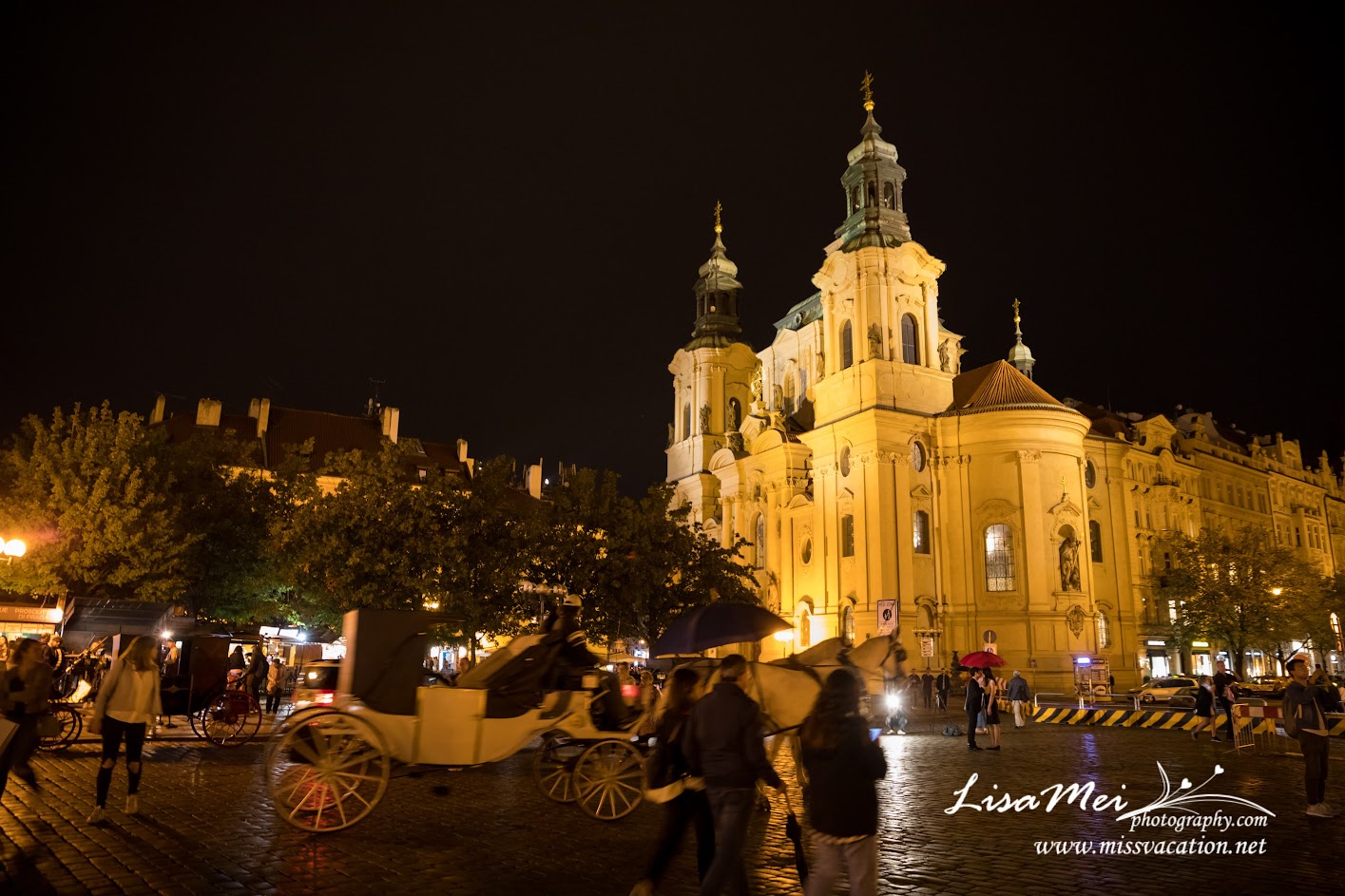 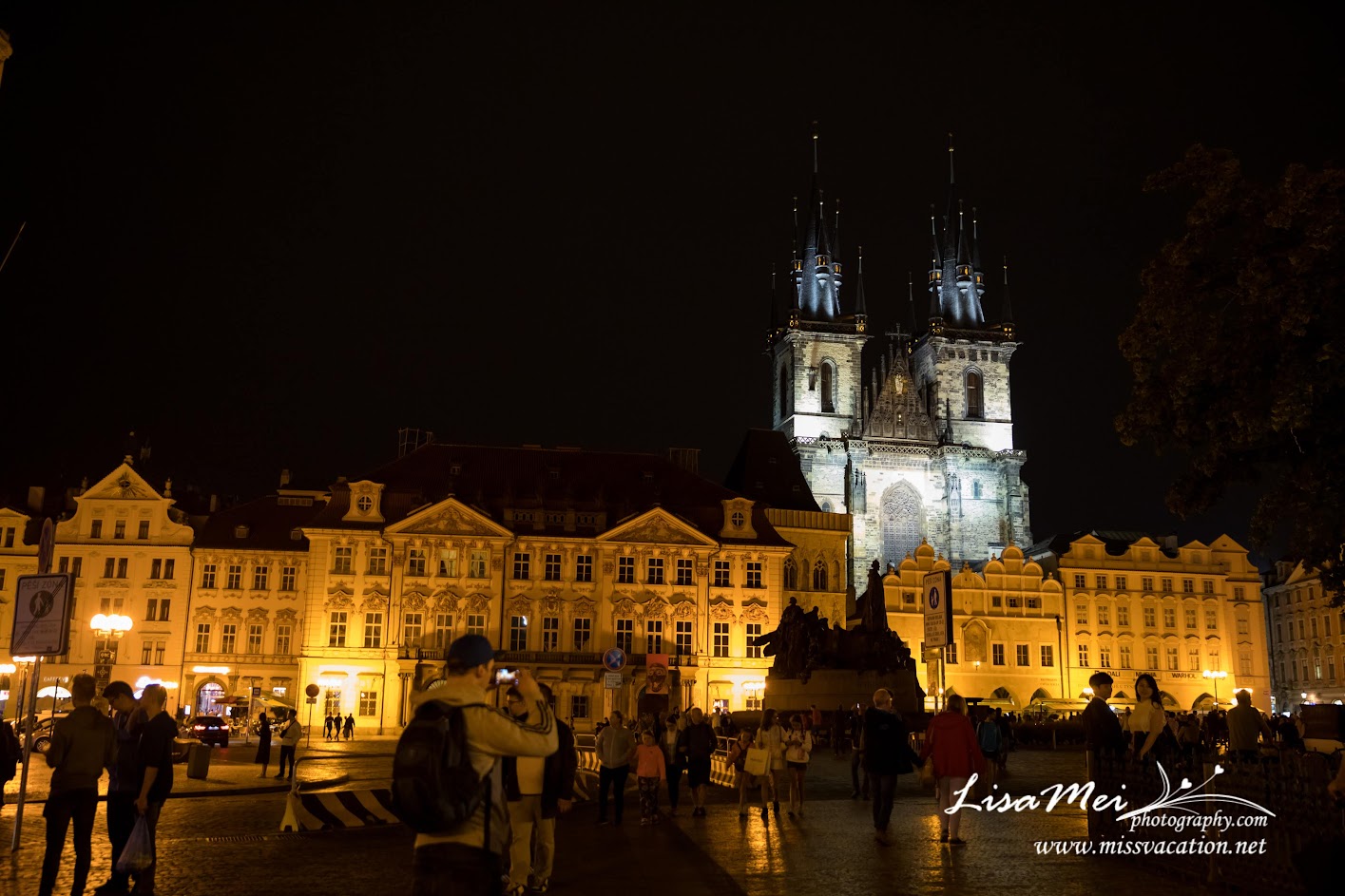 As we walked around the square, there is a church with one door opened, we walked up the stairs to peek in and saw this gorgeous chandelier!!! The church was closed so we couldn’t get in for more photos…the church opens at 10 AM. 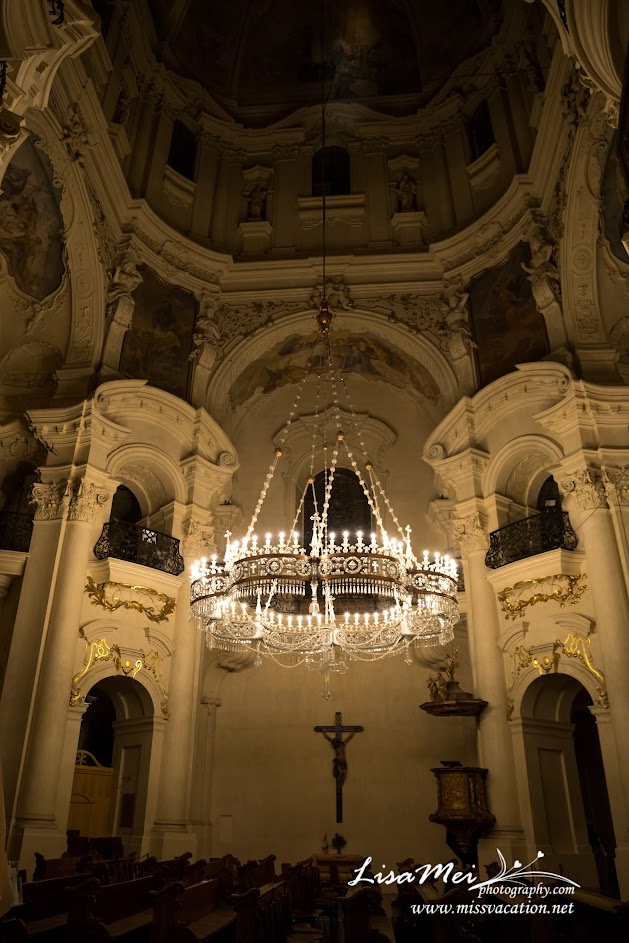 With the disappointment of the Astronomical Clock and it was getting late, we turned back toward Charles Bridge for night photos. 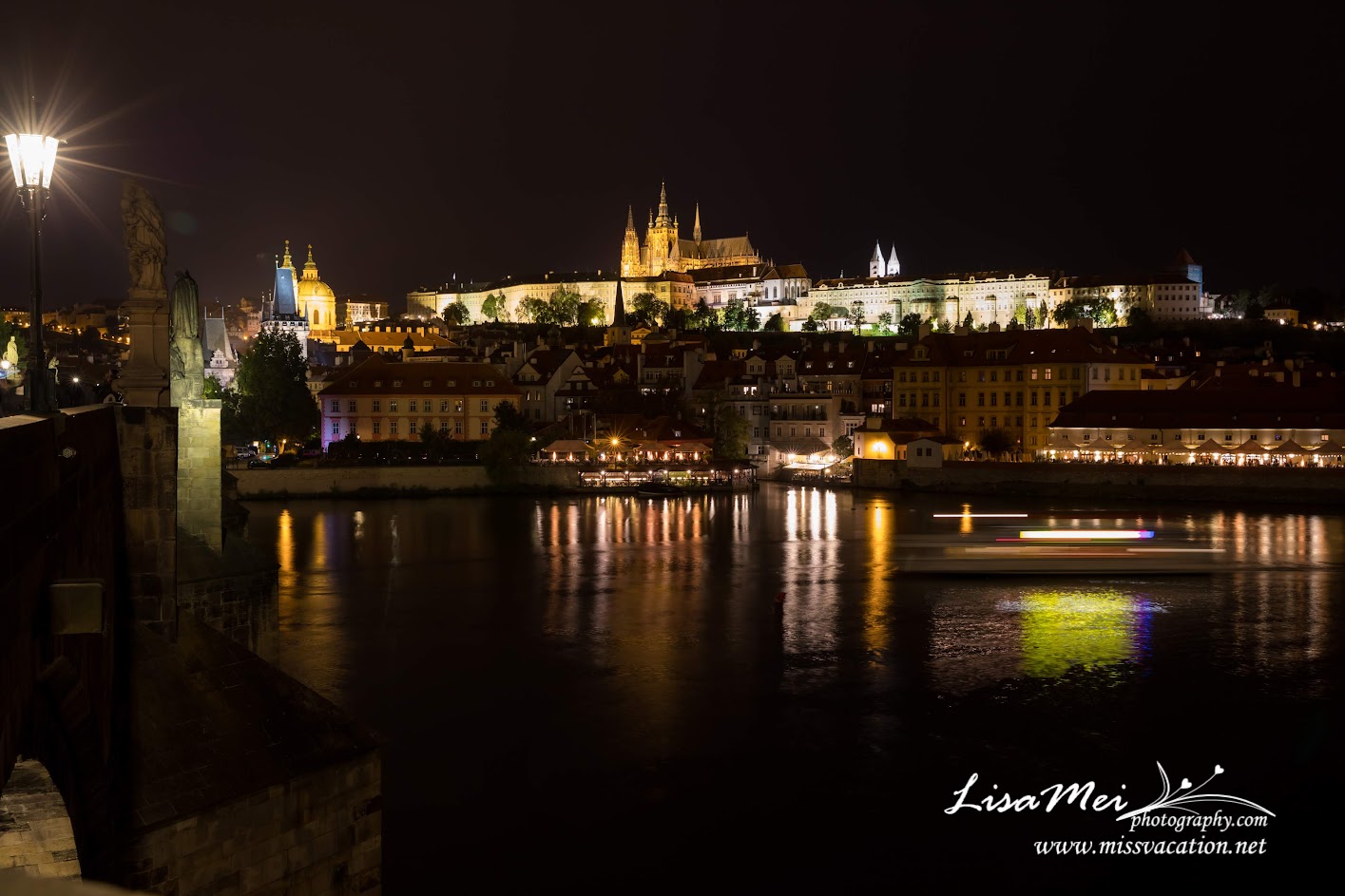 Ahhh Prague, you are so pretty but why you get so cold so fast??? It was well below the average monthly temperature in September so I had no luck with the weather! 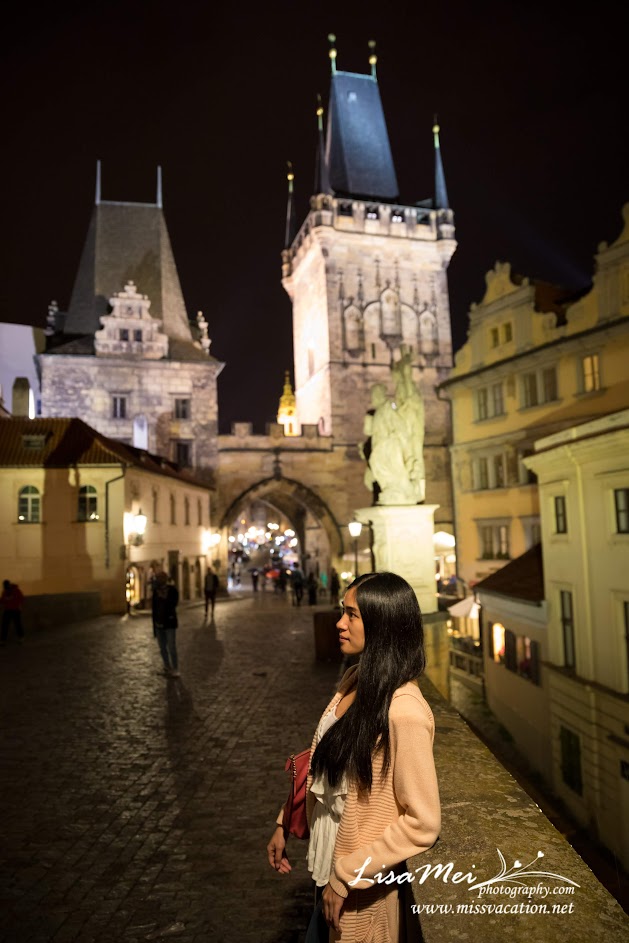 Underneath the Lesser Town Tower provided the perfect framing 🙂 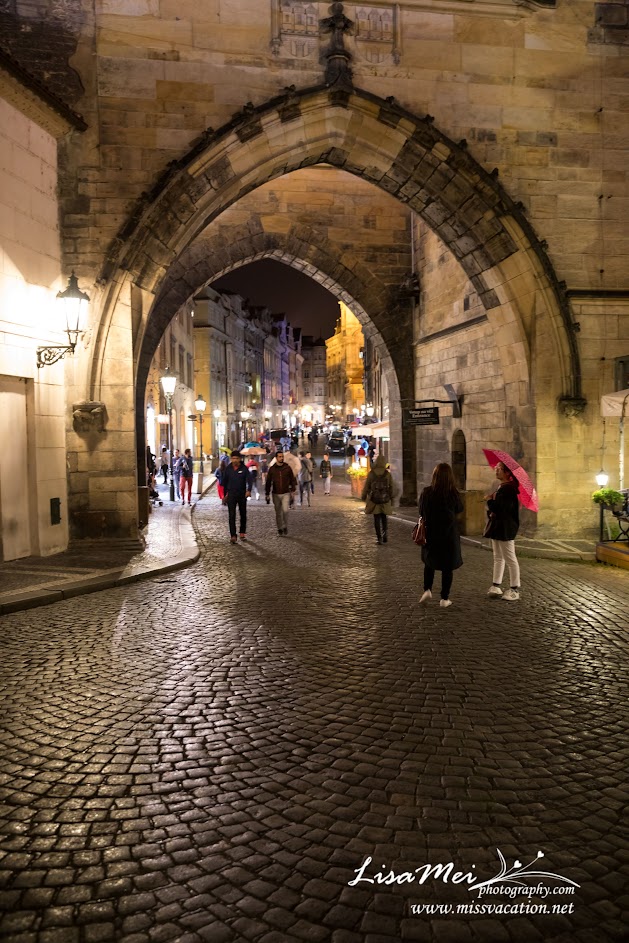 The pastel-colored houses at night…you can see the colors! I couldn’t wait to see Prague in daylight! 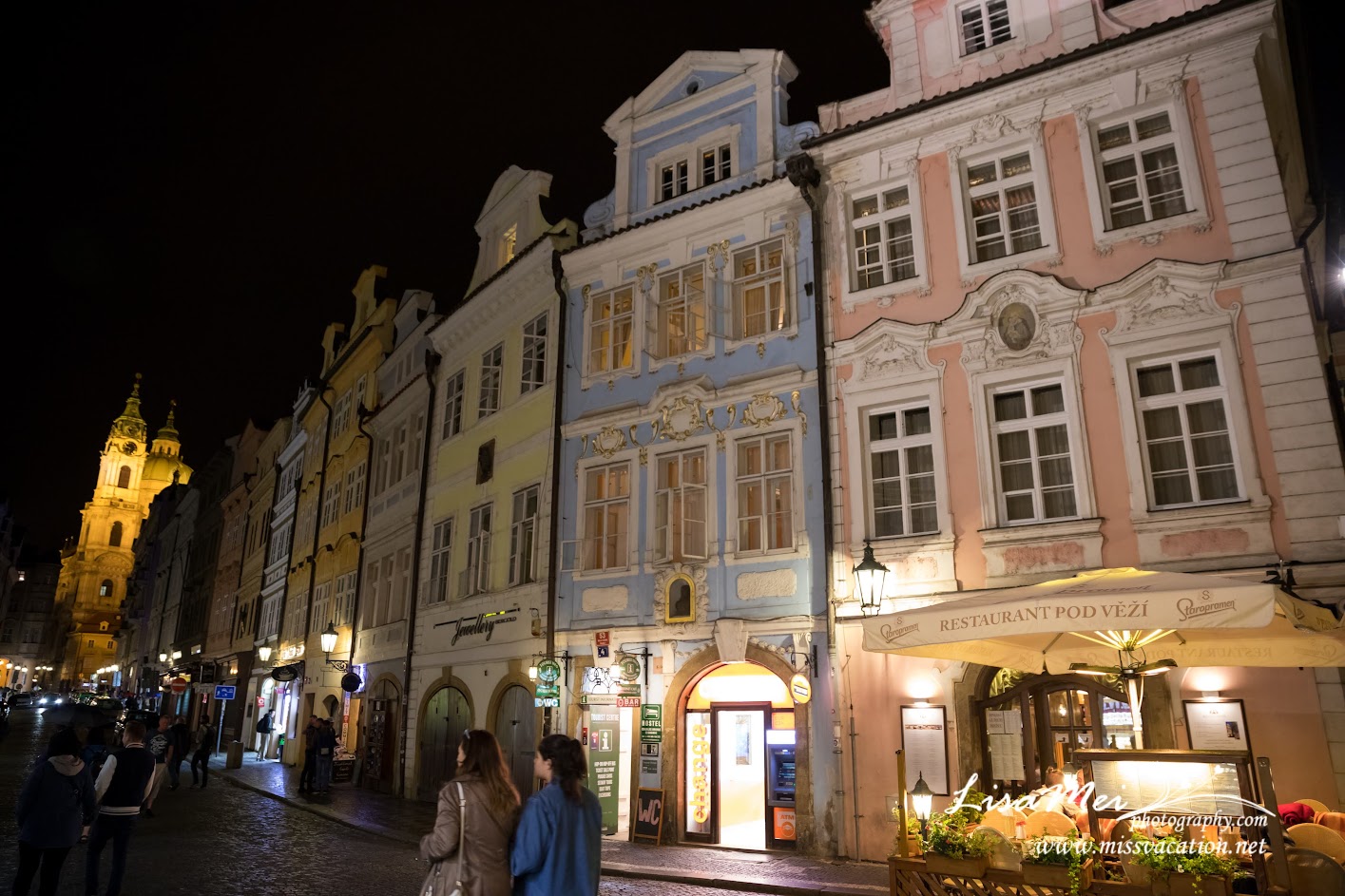 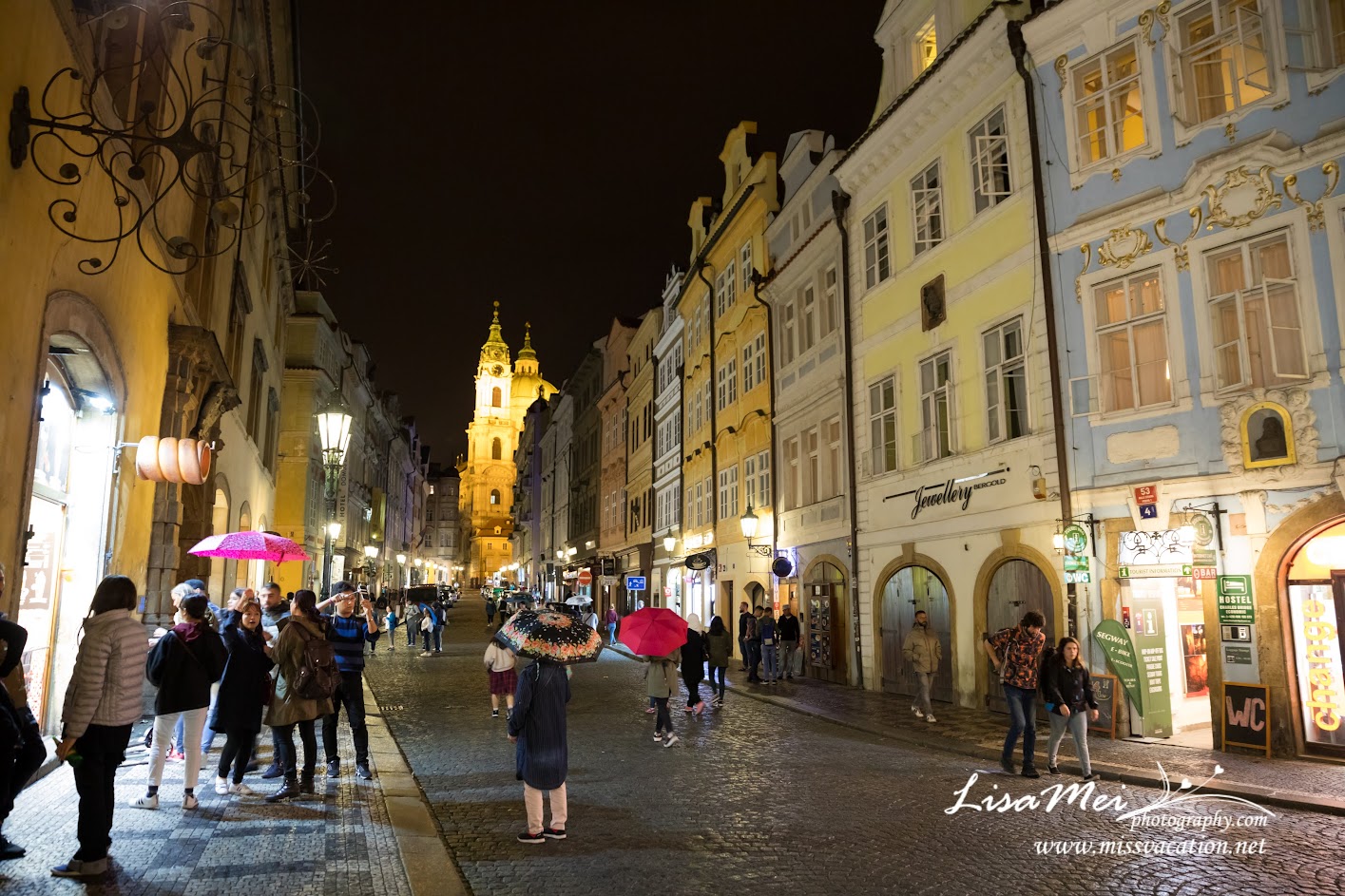 We got back to our hotel and took some photos of the public area in the hotel. There is this beautiful stained glass ceiling corridor surrounded by paintings throughout the walls. 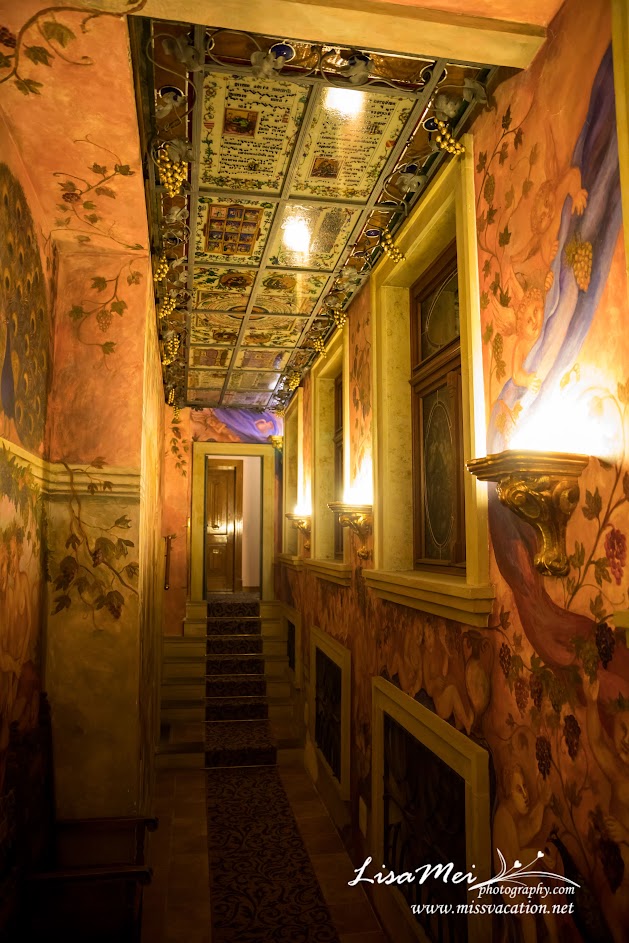 The smallest elevator that I had ever ridden in…can only fit max 2 people! 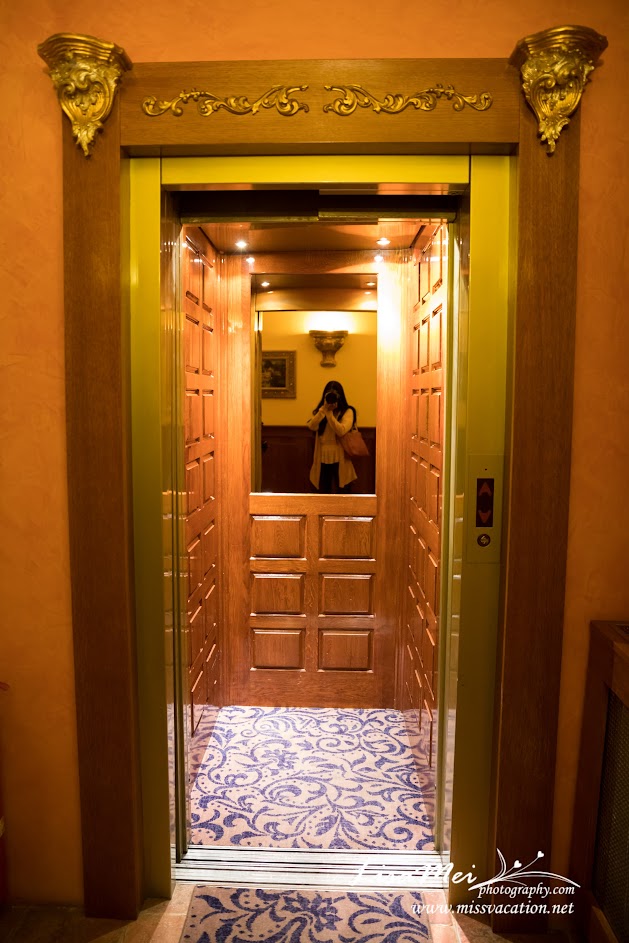 Our room was small but the high ceiling made it feel less cramped. 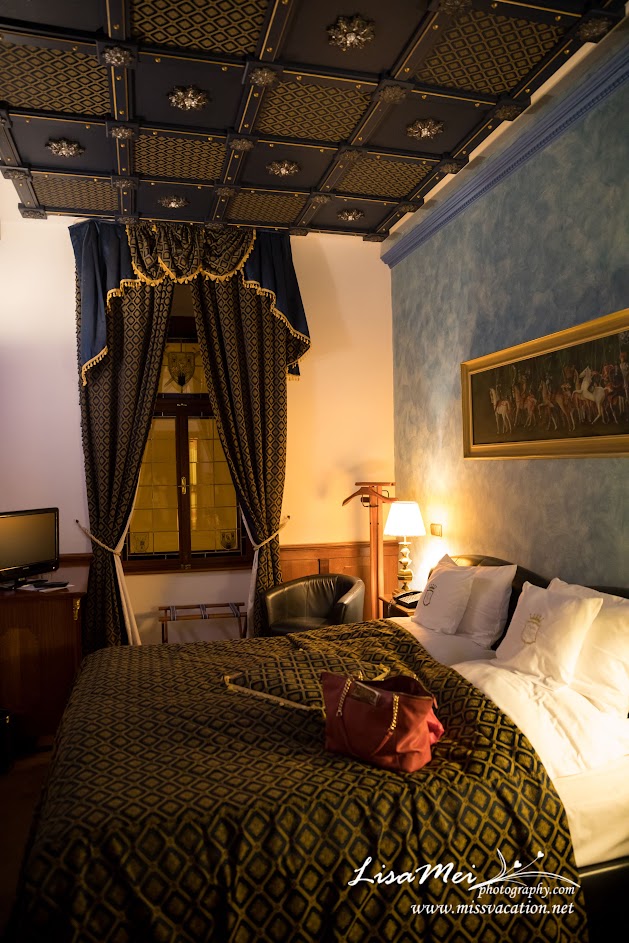 The toilet was clean although the tiles looked old but acceptable. 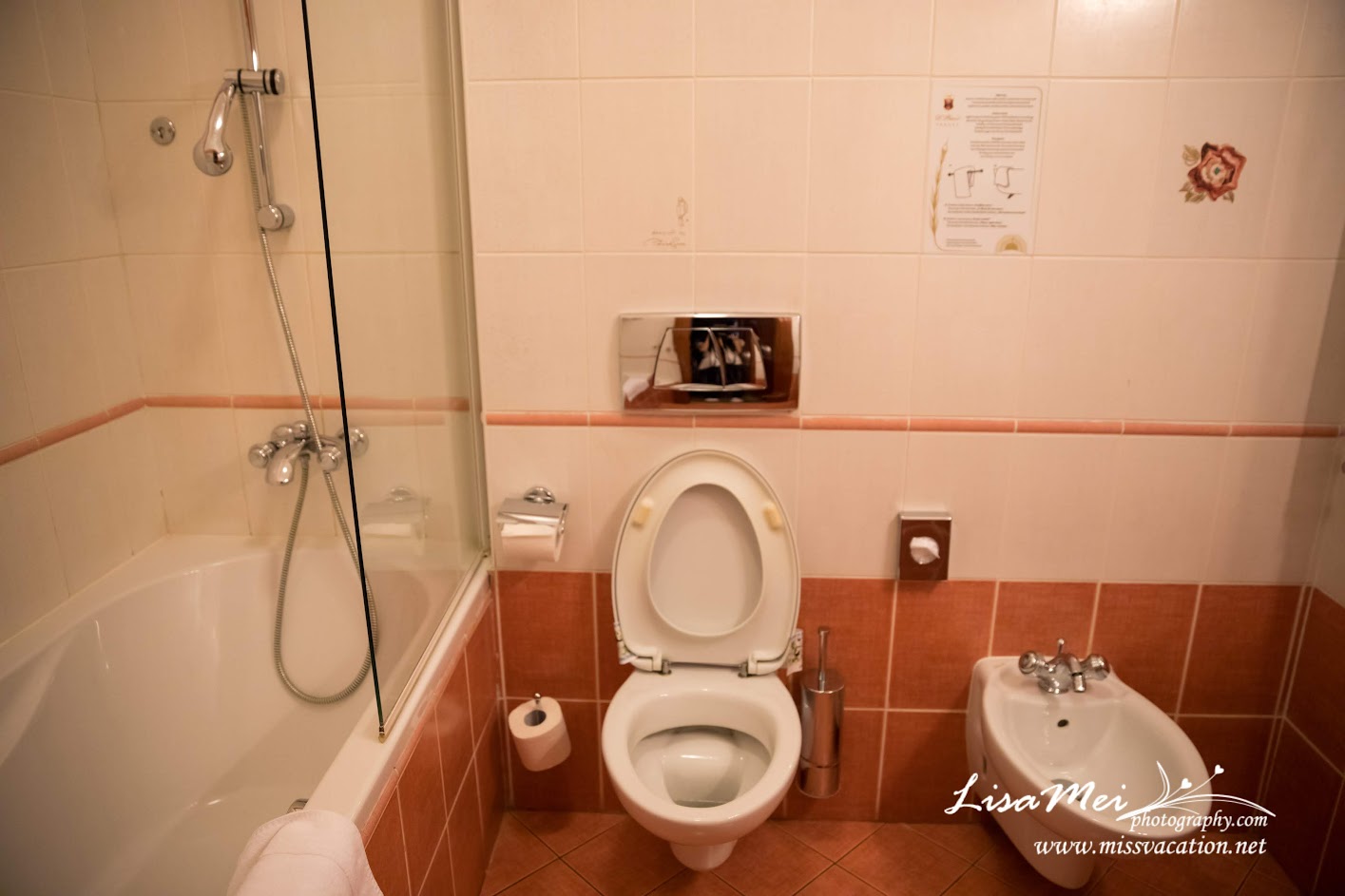 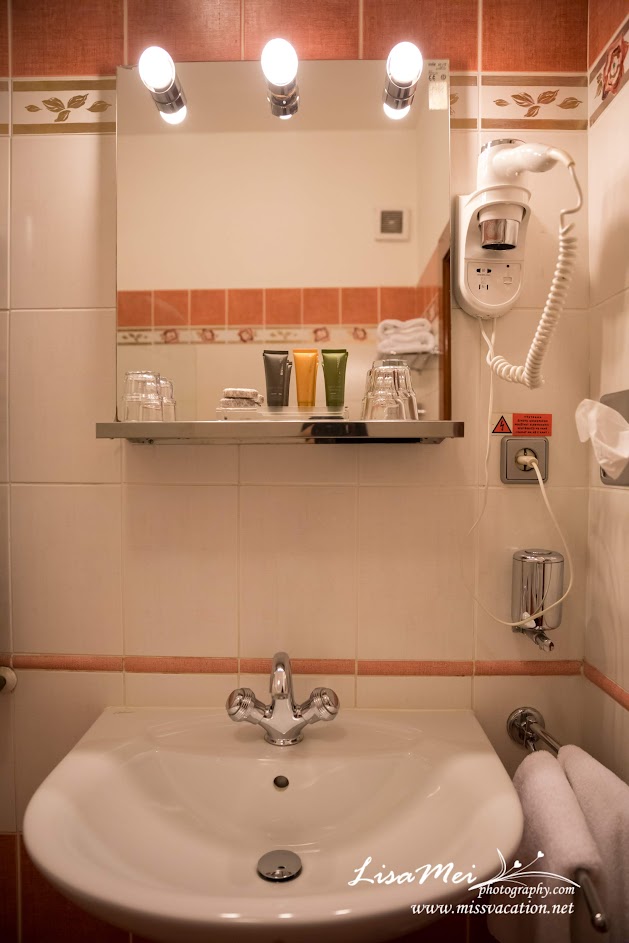 I had ordered skin care products from Avon and the package arrived prior to our arrival but the hotel staff was nice enough to store the package for me. Since our last UK trip and tried out the inexpensive day cream from Avon, it became one of my favorite day creams! It was a good opportunity to stock up (they were like $5 each versus $15 in the US) so I was super happy that my plan worked out! It was almost a full day of travel to get to Prague (I wish they have nonstop flights from Boston) but I already know it was totally worth it!